Just to cut through the crap I will make a disclaimer here: I LOVE MONO. Yep, Mono are in my top three bands of all time (sharing slots with Baby Chaos and dEUS). I have their back catalogue on vinyl, baring one on CD which I have signed – although I am sure I will crack and pick that up at some point too. And I pre-ordered this album months ago. When it arrived I was one very excited girl.

So yes, I am biased and you should bear that in mind as you read on.

Mono are a Japanese art / post-rock band whose albums consist of a few extra long masterpieces – you can often be waiting a good 8/9 mins into a song for it to really get to the punch. But, the build up and swell is amazing and when it drops, oh damn it drops.

Yer – I expect I have lost a fair few readers already. This is a punk based magazine. In Tony’s recent review of Pizza Tramp he stated: “Another thing that really pleases me is that the songs are short. There’s no fucking about here. No time wasted. Which, for this kind of thing is pretty much exactly what you want.” Yer – I thought that album was amateur. This is the exact opposite, long, flourished and very competent / professional. This is a band Steve Albini (the producer here once again for Mono) actually likes.

And yes, they are an art rock band. So I am sure they will be passed as pretentious by many. I mean, read the blurb from their Bandcamp page:

“MONO are a band driven by intangible conflicts. Their albums have found inspiration in the inescapable coexistence of love and loss, faith and hopelessness, light and darkness. Fittingly, their new album, Requiem For Hell, incorporates all of those conflicts into the one universal inevitability in life: Birth, and death.”

Pretty much sums them up. But damn. 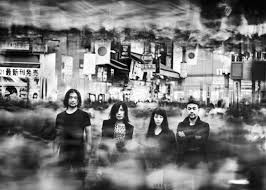 The last dual album Rays of Darkness / The Last Dawn saw them split this light and dark into two albums. The Last Dawn was very much a follow up to Hymn to the Immortal World with beautiful waves of music swelling and crashing whilst Rays of Darkness was a brutal, heavy record which I’d think Deafhaven would be proud of.

Requiem from Hell actually merges the two records, with some of the heaviest music they have put out and yet a familiar feel for those who preferred everything but Rays. The merge works well and probably leaves this as my favourite album of theirs – which from nine is pretty amazing. This is an epic album on the grandest scale.

Death in Rebirth is a song driven by solid military march-esq drumming, as stark as anything on a Shellac album. All the time, there is the background sonic assault of Mono trademark reverb guitars building and getting louder, then speeding up in perfect unison with the drumming. Very familiar to Mono fans, but not boring or more of the same. Somehow it still sounds fresh and holds it’s own.

In contrast, Stellar is quite possibly the least expected song on the album. Full of dreamy strings with a background fuzz, the track could easily fit onto an Olafur Arnalds or Hauschikaalbum. The exception being the background glockenspiel, an old familiar friend on Mono albums and not something I hear often elsewhere.

Ely’s Heartbeat is more classic Mono. Beauty in a song format. Like a fuller Explosions in the Sky. The song is about a friends newborn, which makes the title just SCREAM cute to me. Weirdly enough though, the riff really reminds me of Marilyn Manson’s Coma White. I still love that song, and the addition of the riff here totally took me by surprise. They make really great companion pieces though. And yet, as is often the case when I am reminded of something else, the urge to listen to the original source instead didn’t actually hit me. In the same way that Jonny Cash’s version of Hurt is equally as great as the original Nine Inch Nails version.

The Last Scene closes the album with a lovely dreamscape of trill guitars that mimic strings. Of all the songs here, this is the most hypnotic song on the album – a true soundtrack to a dream. So melancholy and uplifting. I figure if I fell asleep listening to this I would be having some very odd psychedelic dreams on rainbows, clouds and the odd Pegasus. Standard me dreams then.

I have saved the best for last – the masterpiece on this album: Requiem for Hell. Basically it is a bleeding epic. Searing guitars (captured in their full glory by Albini), built on with subtle, strong drumming. A classic build at the 4.30 mark leading to, what would on most other Mono albums, be the heaviest part of the song, the crux. But no, this is the way point leading to an interval at around the 10/11 minute mark would be a suitable end on a bunch of their other songs. But no, this is a false summit here – it gets darker. It… gets… better?

It comes crashing down with all the heavy brutality of Rays of Darkness, minus the screaming vocals. At times it sounds like it will just drown in its doom but it is kept together, finding a darker turn every few swirling rounds. It is very much reminiscent of the circles of Hell that Dante writes about (ooo, spoiler…). Doom, drone and a bit of noise: I love it. It isn’t for everyone.
There is a lovely video to accompany this – a proper gothic art piece. Ok, maybe lovely is the wrong word but it is beautifully shot. I love it… but, it is a shame that it is very much a shortened, edited version of the song and the full effect is not quite captured.

The album is said to be based on the Dante’s Inferno. That was a hard one to read and I actually gave up. I am not great at reading poetry, I prefer prose adaptations of books like the Odyssey and Iliad. To be fair, I tend to need song lyrics spoon fed to me. Unless I get the point quickly, unless the lyrics have meaning to me, I tend to miss the point. How ironic that a book inspires such an amazing album that has no words what so ever. And it speaks to me far more, tells me the story it sets out to tell. So much easier for me to get into.

So there you have it. I love this album and I put it up as their finest to date over a 18 year career. It is available now to buy. I personally have the very pretty sunburst vinyl set – maybe my prettiest vinyl to date. The sleeve art work is not quite as pretty as Ray/ Last Dawn but the vinyl more than makes up for it. Maybe check it out at their Bandcamp page: