I’ll start out by apologising to Juice Drunken Sailor for apocalyptic level of delay in getting this review out there. I’d like to say I’d been doing something(s) productive, but realistically I’m not exactly sure if that’s the truth. I’ve been applying for jobs (probably could’ve spent my time better repeatedly shooting myself in the face), feeling sorry for myself, decorating the living room and most importantly playing the remastered version of Resident Evil 2. Anyway, enough about my sorry excuse for a life…

It seems somewhat peculiar to me to start this review with a statement such as “this is a return to form” when it’s the band’s third LP, and I already gave both those previous LPs scores of 10/10. If you can’t be arsed to read the rest of this waffle, be satisfied that this is yet another 10/10 review. Three for three. These Booji Boys dudes are literally that good.

So why a return to form then? Seems spurious, right? Maybe it is a spurious statement. Perhaps what I’m trying to say is that this ‘un, Tube Reducer, is a return to the instantaneous pay-off of their debut s/t LP, whereas the second one, Weekend Rocker, required a bit more of a time investment in order to get that reward. I’m sure that such an opinion will spectatcularly divide the public or something. Or maybe it would if more people listened / absorbed the things I say and write… 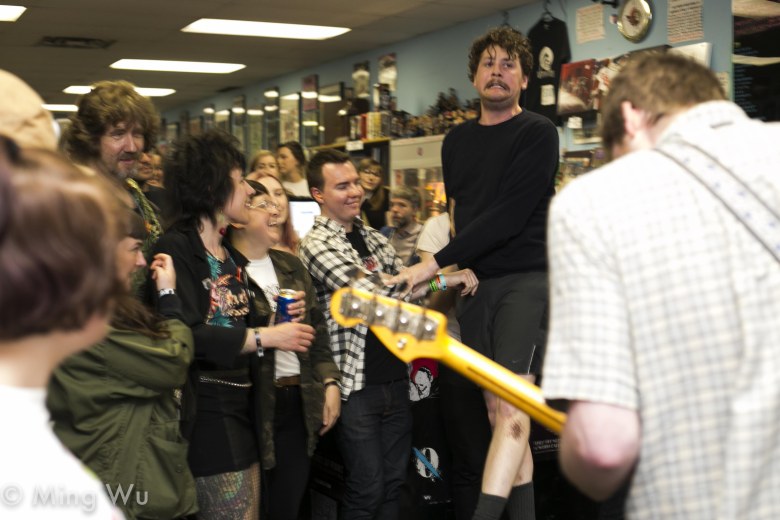 I guess for the uninitiated, I can rehash that these cats are from Nova Scotia and take their name from a character from the strange world of Devo. If you haven’t listened before, there’s no shame in that. This blog is all about sharing the love (and occasionally raining down fire and brimstone on rubbish bands) and getting the word about and whatnot. You can expect to hear some frantically infectious, thrown for a fruit loop garage punk goes post-punk. It’s fuzzy, madcap, and utterly endearing. The lyrics are often lost in squalls of fuzz, and yet the vocal is delivered with such an earnest intensity and plaintive frankness that I think you’ll find yourself sold.

Typically, as I’m sure any regular readers will tell you, I eschew arty-farty stuff in favour of no frills stuff for the most part. But sometimes it just falls inexplicably and perfectly right. I think the trick here is not overdoing it, and avoidling overblowing it by tempering it with a steely backbone and barbed hooks. If you can imagine undergoing a prolonged bout of electro-convulsive therapy whilst having X-Ray Spex pumped into one ear and Young, Loud & Snotty (The Dead Boys) pumped into the other, then it might possibky be a bit like this. Or maybe not. I’m not recommending you try it, mate.

If you have a taste for bands such as The Coneheads, Hank Wood & The Hammerheads and so on, then you’ll probably already be clued in on this lot. If not, then I would urge you to listen below without further ado, and then g check out those bands too! Regardless, I continue to be thrilled and excited by this crew, me.Tony of Nurgle rating 10/10

This is available on silver, orange or black wax from Drunken Sailor Records now. I bought a silver one, It’s dead nice.