These days I seem to be in the habit of reviewing records that come out after a band has been on a bit of a hiatus for some reason. I don’t think it’s purposeful. If so, I have no explanation.

But the new Descendents record, though. That’s pretty exciting, right? This is the first new thing from them since 2004’s Cool To Be You (on Fat Wreck Chords) – so a 12 year hiatus from the studio. But Cool To Be You was also released following an 8 year hiatus. Wait a minute… that’s a mere 3 albums in 20 years, making for an average of an album every 6.66 years. Where am I going with this? Nowhere, of any real relevance or general import really. The devil is surely proud, though. 6.66. Fuck, man. If I was the kind of idiot that was into numerology, there’d probably be something significant there. Luckily, broadly speaking, I’m relatively sane. 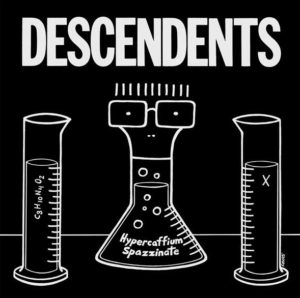 Anyway. Let’s get to it, shall we? These things always seem to have a semi-autobiographical element to them, for no real reason that I’ve been able to determine. It must be like, my style of writing or something. So let’s look at my first encounter with Descendents…

Being from a total cultural backwater (Barnsley, South Yorkshire), and it being kind of pre-internet days for most working class families, I’d never heard of ‘modern’ punk rock until around 1991/92, when Nirvana broke through with Nevermind. I fondly remember my first couple of ‘proper’ punk tapes. One had White Trash Two Heebs & a Bean by NOFX, backed with Pennywise – s/t, and the other had Lights, Camera, Revolution by Suicidal Tendencies backed with (embarrassingly) the Macc Lads – Live at Leeds. Around this time I was also exposed to Blind by Corrosion of Conformity. All of these were provided by Damien Long’s older brother (name forgotten). Not that anybody knows (or probably cares) who Damien Long or his older brother are, but credit where credit’s due. Anyway. That was it in terms of my exposure to punk rock for a good few years. It’s worth mentioning that around this time Anthrax were (and still are) on heavy rotation. 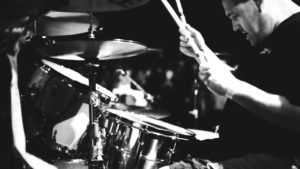 Then came the year of our lord, 1997. I’d never heard of Descendents, beyond maybe being mentioned in the thanks list to a NOFX or Rancid record. I also already knew about bands like Pennywise, Lagwagon and Bad Religion as you could (weirdly for a shithole like Barnsley) get their most recent records in the local record shop at the time, Casa Disco. You could also get a little bit of hardcore stuff that had crossed into the mainstream a little, such as Sick of it All, Biohazard and Suicidal Tendencies. Beyond this, it was something of a sub-cultural drought as far as modern punk rock went. And yoof culture in general, really was a bit of a joke. I’d had extended flirtations with metal and indie rock too, but not really fitted in properly with either scene. Collectively, both these scenes were referred to as “bag-heads”. There was even a night out at the local club (Japanese Whispers) called “Bag-head Night”. Now in other parts of the North, bag-head was slang for heroin addicts. In Barnsley, this was used to refer to anybody that didn’t fit into the proto-Chav-embryonic-Scally-hoodlum world of ignorance expressed through petty violence and verbal abuse. Go figure. It had been a bit of a shitty decade to grow up in small town Northern England, really. Utterly soul destroying. No wonder I was somewhat mixed up and confused.

Then, Descendents played the main stage of the Reading Festival on a Sunday afternoon (in 1997). I didn’t really know what was going on, didn’t know any of the songs, but I thought it was pretty cool. Subsequently, I picked up Everything Sucks (Epitaph Records, 1996) in Vinyl Exchange in Manchester, along with Dude Ranch by Blink 182 (I thought they were cool then, OK? God. Leave me alone). Along with my prior discoveries I was now sold.

Then came university in Manchester from 1998, and I kept discovering more stuff with more ease, but realistically I was still lagging behind a bit from the Manchester locals who had been living in a veritable sub-cultural paradise by comparison to my shitty home town. I threw myself into it with much gusto, dredging through label samplers from Fat, Lookout, Hopeless and Epitaph etc. etc. Backtracking record labels. Spent a fuck-ton of money on music. And I’ve got Everything Sucks to thank for speeding me on my way. Since then I’ve done punk club nights (that people actually went to), record store, record label, been a promoter. Now I’m sat here writing this. Holy shit, Batman. 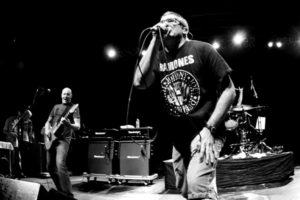 Anyway, enough nonsense about me, we’re here to talk about the new Descendents record (side point: it is Descendents not The Descendents innit? The subject of some confusion for many over the years). To cut to the chase let’s try a new approach (as I wonder if I have waffled too much) and bullet point this motherfucker:

• Is it any good? Hell yeah, it’s pretty fucking decent.

• Does it sound like Descendents? Of course it does. Descendents wrote the book on this sound. Pretty much everybody reads from that book these days. But you can still differentiate the specific sound of Descendents from a mile away. It’s there in the song structure. It’s there in Milo Aukerman’s distinctive vocal. It’s there in Bill Stevenson’s drumming. In Steve Egerton’s guitar tones. In Karl Alvarez’ bass lines. Collectively it’s clearly a Descendents record.

• How does it compare to the older stuff? Pretty fucking well, mate. As well as carrying forward the sound style first laid down on Milo Goes to College (SST, 1982), it’s also continuing to carry forward their progression to being a tight, melodic pop punk band, which was first consistently re-achieved (in my opinion) achieved on Everything Sucks, which for me saw them leave behind the strange sporadic primitive cave-man stomps that are peppered throughout their mid-career records (which is not to say that those songs don’t have a valid place, mind). Like they took things a step further on Cool To Be You, they’ve stepped it up again with Hypercaffium Spazzinate. The melody is for sure still there, and if anything emphasised. The tempo is maintained, and often kicked up a gear. This shit is tight, yo. It makes me want to dig out my skateboard and go for a thrash, mate. 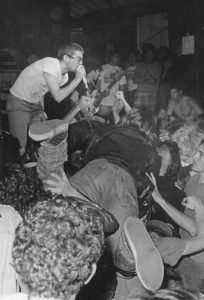 • Are there any shit songs on it? Actually, no, there aren’t. Nothing stands out as being particularly weak. I did have a moment of worry a couple of days back, after my second listen through, when I felt like although I’d thoroughly enjoyed listening to it, nothing felt particularly memorable. This left me with a bit of a sour taste in my mouth. Later that day, I realised that it hadn’t in fact been the case, and caught myself humming Spineless and Scarlet Red in the shower. I had in fact just been in a bit of a funk at work because I was bored. What’s a punk to do? So faith in my existence is restored as a result. Score.
This is a bit weird. I feel like I’m briefly interviewing myself about this band and record. But, fuck it, let’s go with it…

• What’s the theme, then? As usual there’s a real feel of youthful exuberance and fun here (bearing in mind that these guys have variously been doing this band since 1977 or so in one form or another). This seems tempered by a mature attitude and perspective, exploring themes such as looking back at their musical history with nostalgia, and touches on career changes with Testosterone (Milo has apparently stepped away from being a scientist – specifically molecular biology, which sounds all complicated to a relative dunce such as myself). There are also references to Milo’s health and well being, particularly lifestyle changes – No Fat Burger¬ shows he’s had to radically change his diet due to an inherited condition, but it’s presented in the form of almost a sequel to I Like Food from the Bonus Fat mini album (SST, 1985):

No more fat
No more fat
I like food, but all the food that tastes good…
I can’t have that

Beyond this there are also songs on the subject of relationships and/or the lack thereof such as On Paper, and the literal and figurative Feel This. There’s reference to all-too-relatable mental health issues in tracks like Victim of Me:

If anything, it’s another demonstration that this is clearly a Descendents record. As if there’s any doubt.

• But they’re getting on a bit in years aren’t they? Well, yeah, obviously. Nobody lives the life cycle of Benjamin Button (although I once worked with somebody at Manchester town hall who thought that film was based on real life – go figure). There’s no denying these guys are entering into a later phase of life, but you’re only as old as you feel, right? And these guys still fucking rip on record as well as live (saw ‘em again a couple of years back and it totally ruled). Fuck age. I’m 39 tomorrow, Christ’s sakes. And I’ll be seeing Bill and Steve playing in Flag on Monday night. I think it’s fucking cool that these guys and others are still doing this stuff.

• Are you too old for this stuff, then Tony? Dunno. Probably. Feels good to be a punk loser, as Nailbomb (remember them?) once said. Plus I notably came out of mosh retirement for one night only a couple of years back. So draw your own conclusions.
I’ve waffled on enough now.

So. Tony of Nurgle verdict: a justifiable 9/10

As usual I will encourage you to decide for yourself – you shouldn’t need me to form your opinions for you. Unless you’re a total moron. Go and stream the album here on Vice: