So this is the third installment of this series. So I thought that I would lay bare my soul and/or inner depths
of my rotten soul. It’s possibly interesting. Maybe. Don’t say I didn’t warn you. 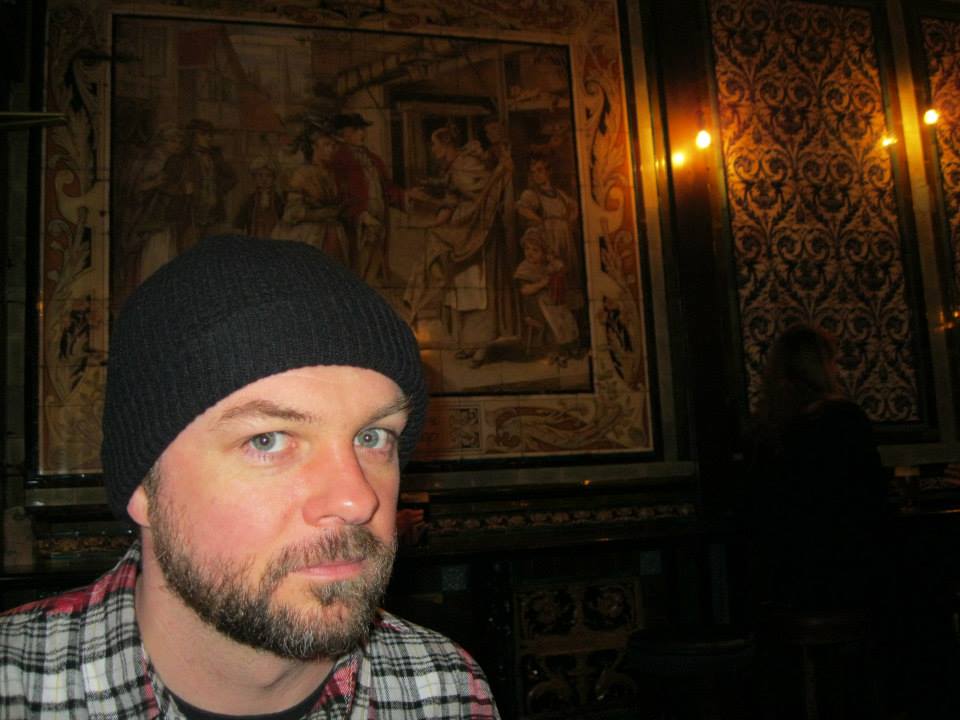 1. What was the very first way that you became aware of punk? i.e. what was your first encounter with punk?
It was ye olde plague yeare 1982 (or it could’ve been ’81, either way, I would have been 4 or 5 at the time) and I was in Barnsley town centre with my mum, and we were walking past the library (which isn’t there anymore). Coming the other way (no doubt heading to a shop called ‘Rock Bottom’) was an outlandishly dressed young gentleman with a brightly coloured mohawk. At which point I squeaked out “that man looks like a dimetrodon!”, before being dragged away being told to be quiet by my mum, who, being I suppose a bit traditional in some ways, was, looking back, obviously afraid of punks because they looked weird or something. I always used to pester my dad to take me into ‘Rock Bottom’ because it had a massive drawing of Dennis the Menace with a safety pin through his nose hung up in the window. Fuck knows what kind of shit they actually sold. I really had no idea what punk was then. Beyond thinking the punks looked cool and exciting and I wanted to be like them.

2. How did you get into punk / alternative music?
Hmm. Alternative music I started to get into around 1988, so when I was 11. Ths came in the form of Faith No More’s From Out Of Nowhere single and The Real Thing album (1988 & 89, Slash Records), which I was introduced to by my best bud, Tom Nicholson. As for punk, well, this is actually an easier one, which I touched on in one of the semi-autobiographical reviews I have a habit of churning out. So I’ll bob in the appropriate bit of the Descendents ‘Hypercaffium Spazinate’ review here:
Being from a total cultural backwater (Barnsley, South Yorkshire), and it being kind of pre-internet days for most working class families, I’d never heard of ‘modern’ punk rock until around 1991/92, when Nirvana broke through with Nevermind. I fondly remember my first couple of ‘proper’ punk tapes. One had White Trash Two Heebs & a Bean by NOFX (Epitaph, 1992), backed with Pennywise – s/t (Epitaph, 1991), and the other had Lights, Camera, Revolution by Suicidal Tendencies (Epic, 1990) backed with (embarrassingly) the Macc Lads – Live at Leeds. Around this time I was also exposed to Blind by Corrosion of Conformity (Relativity, 1991). All of these were provided by Damien Long’s older brother (name forgotten). Not that anybody knows (or probably cares) who Damien Long or his older brother are, but credit where credit’s due.

3. What was your first gig?
My first gig was Faith No More and L7 in Sheffield, 5th December ‘92. It fucking ruled.

4. What was the very first album you got? Also what was the first punk album you got?
Hmm. First album I ever got was Michael Jackson’s Thriller. I was probably about 7 or 8. Motherfucker turned into a werewolf AND a zombie in the video for the title track, so what’s not to like? Plus this was when he was classed as some pop genius, so many many years before the world decided that he was some kind of plastic-surgery addicted paedarist, and many more before he somehow went back to posthumously being a genius again. Ladies and gentlemen, I give you the high-brow concept of public opinion.

5. Were you in a band while at high school or college? If yes what was the name, and how bad did you suck?
We had a ‘band’ at 6th form college called Peach Rifle. We fucking sucked. We had about 2 or 3 practices with me attempting to sing Screamager by Therapy? Before I got kicked out. The world is a better place as a result.

6. What is the biggest influence that punk rock has had on you as you’ve developed as a person?
I’d like to say that it taught me that from existing as an something of an outcast or social pariah on the fringes of society you can become accepted. But that is utter bullshit. I still feel like I’m being judged by a bunch of posers that are actually unwilling to commit to anything apart from the next trend. Fuck you, you fucking losers. You make me sick. You are why I’d rather stay at home than go to shows. Really, from that statement, it’s clear that all I actually crave is acceptance and to be able to learn to be happy with who I am. Sob. 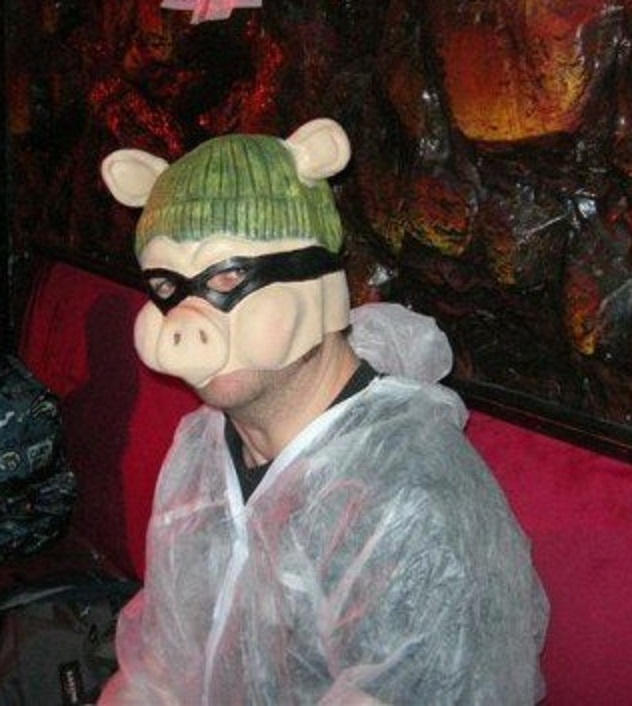 7. What has punk rock caused you to question most about the world we live in?
Why as a species we are so continually willing to take a solid, violent, bruising backshafting from those that purport to be in authority, and stand by whilst the most vulnerable members of society get constantly shat on by those who have the actual power to instigate sustainable social change. Beyond that, given the vast amount of progress the human race has made up to this point, why the hell can’t we just get along? As a species, we’re doomed, and when we finally extinguish our own species through war and disease, it’ll probably be long over due.

8. What was the most recent gig you went to? (any genre)
FLAG at the London Underworld. Very very good. I felt alive and everything. 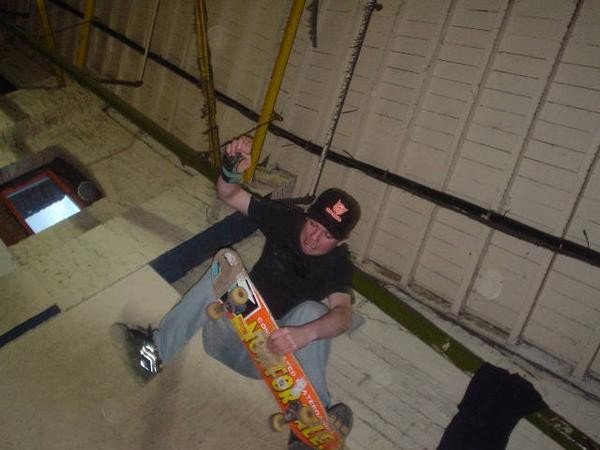 10. Do you geek? If so, how?
Big time. Watch my street cred plummet to unknown depths… I’m heavily into painting and converting miniatures for use in tabletop strategy games like Warhammer 40,000 and a more public domain / home brew system set in the same universe known as Inquisimunda or INQ28. I also only read science fiction and fantasy. Basically books with maps in the front. I also have a fondness for quality sequential graphic art (or comics).

It’s all basically a bit of escapism from real life and the shitty world and society we are forced to inhabit. Motherfuckers, I’d rather be in space. No wonder the people I work with think I’m an alien.

11. Give me your top ten records EVER, and a BRIEF rundown of why you’ve chosen each one…
OK… This is much much harder than you’d think. Sorry to all the other writers for burdening you with this task. And I failed to keep it to ten choices. And still, there were a lot of records that are important to me that I had to leave out. So an honourable mention to:

So, my top “ten”. In no particular order, then:

1.The Lawrence Arms – Metropole (Epitaph, 2014)
This is the sound of one of my favourite bands at the top of their game. This perfectly encapsulates the existential angst of the late 30s punk rocker watching life slip through their fingers as the regrets and the ‘might have beens’ stack up, while being too entrenched in personal squalor and ennui to bother doing anything about it.

2.Sinners & Saints – The Sky Is Falling (Bridge Nine, 2002)
The best rock n’ roll album of all time. Bringing together two of my favourite song writers to produce a semi-autobiographical masterpiece of loves lost and hopes dashed. Like a street punk take on Appetite for Destruction without the shit bits. It confuses me that nobody has put the full album up in the correct order, so here it is in the wrong order:

4.The Trouble – Nobody Laughs Anymore (Bridge Nine,2005)
Hardcore and oi! influenced street punk at it’s finest. Recorded in the 2005, sounds like it was recorded in the 1980s but with a more modern sound. This is the sound of youth and anger. Truly one of the most overlooked but finest opuses of all time. This one’s for you. Never hang up your boots. Couldn’t find the full album – sorry!

5.The Weakerthans – Reunion Tour (Epitaph / Shock, 2007)
Winnipeg’s finest indie rock heroes ended their time as a band on a high with this one. Melodic, intelligent, wistful bi-polar rock, penned to the highest standards. Totes emo-shunal. Perfect soundtrack to quiet introspection.

6.a. Leatherface – Mush (Roughneck Recording Company, 1991)
Best British punk album ever? For certain. ‘Do you understand what it’s like to be a laughing stock in life?’ Jaundiced tales of working class existence ‘neath overcast northern skies. Simply put, ruggedly beautiful.

6.b. Hot Water Music – Neverender (No Idea Records, 2001)
This is, I suppose the flipside of the Leatherface coin. It’s tough to pick a favourite HWM record. And I suppose this one is actually a collection of 7in records. But it does capture their best body of work. Simply put, amazing.

7.The Loved Ones – Keep Your Heart (Fat Wreck Chords, 2006)
One of the albums that restored my faith in the fact there were still people that thought and felt like I did. ‘The choice may be to keep your heart, you’ll lose your head’. An absolute classic.

8.NOFX – White Trash, Two Heebs and a Bean (Epitaph, 1992)
The one that started it all for me. See anecdote above. Fast, melodic punk with metallic lead breaks. RKL’s Riches to Rags is probably technically better, but this holds a special place in my heart. 25 years on, this still fucking rips, yo.

9.Blood for Blood – Outlaw Anthems (Victory, 2002)
Neo-brutalist working class anger set to a soundtrack of rock n’roll white trash hardcore. Cathartic, offensive, truthful. Still kicks ass and takes names after all these years. This is the sound of growing up angry, young and poor.

10.a. Avail – Over the James (Look Out, 1998, subsequently reissued by Jade Tree, 2006)
You basically can’t have a self-respecting top ten without an Avail record. And it can be tricky to choose which one. At the moment, this one’s it. A truly definitive, swaggeringly majestic melodic hardcore record, that I class as a game changer. Here’s a snippet from Sanctuary 13:
“I want to be up front and honest, but I can’t at all
Don’t want to set myself Up for a fall
I’ll say it until I’m blue In the face
And won’t get a response
It’s so pitifully tame now, good day now,
Drop the name of an unknown place, and I’m leaving
Reason, give me one reason
A short invitation, or none at all”
For me, these guys re-wrote the book on melodic hardcore. It’s raw, monolithic, powerful and moving.

10.b. Kid Dynamite – Shorter, Faster, Louder (Jade Tree, 2000)
…and you can’t have one truly definitive melodic hardcore record by Avail without counterbalancing it with a Kid Dynamite record. The title sums it up better than I can. Fast, furious, precise, melodic, fist raising, finger pointing awesomeness. No time is wasted here. This one was definitely another game changer, and I think redrew the map for the genre.