I’d not been familiar with Doe. I’d heard the name in passing, and when my old pal Carpet mentioned he wanted to review their new album, I started looking into getting it sorted. As it turns out, the boy Carpet has a bit much on his plate at the current time, so I’m stepping up to bat on his behalf. First of all, this review is a little late, as Some Things Last Longer Than You came out on 9th September.

I’m going to operate on the assumption that everyone else is as uncool as me, and therefore knows nothing at all about Doe. A bit of light digging around tells me that they formed in thee olde yeare 2013 the founding members are Nicola Leel (who provides the honeyed gravel vocals and plays guitar), and Jake Popyura (who provides the drums and vocal harmonising). The line up is rounded out by Dean on second guitar (they have no bass player, but to me the sound doesn’t really suffer as a result – so kudos!). They are based out of London, and have previously released several EPs and splits (some of which are self-released, others have been released through Art is Hard, Alcopop! and Fierce Panda amongst others), as well as the First Four LP which also came out on Specialist Subject, and collects a whole bunch of this earlier material in one place. 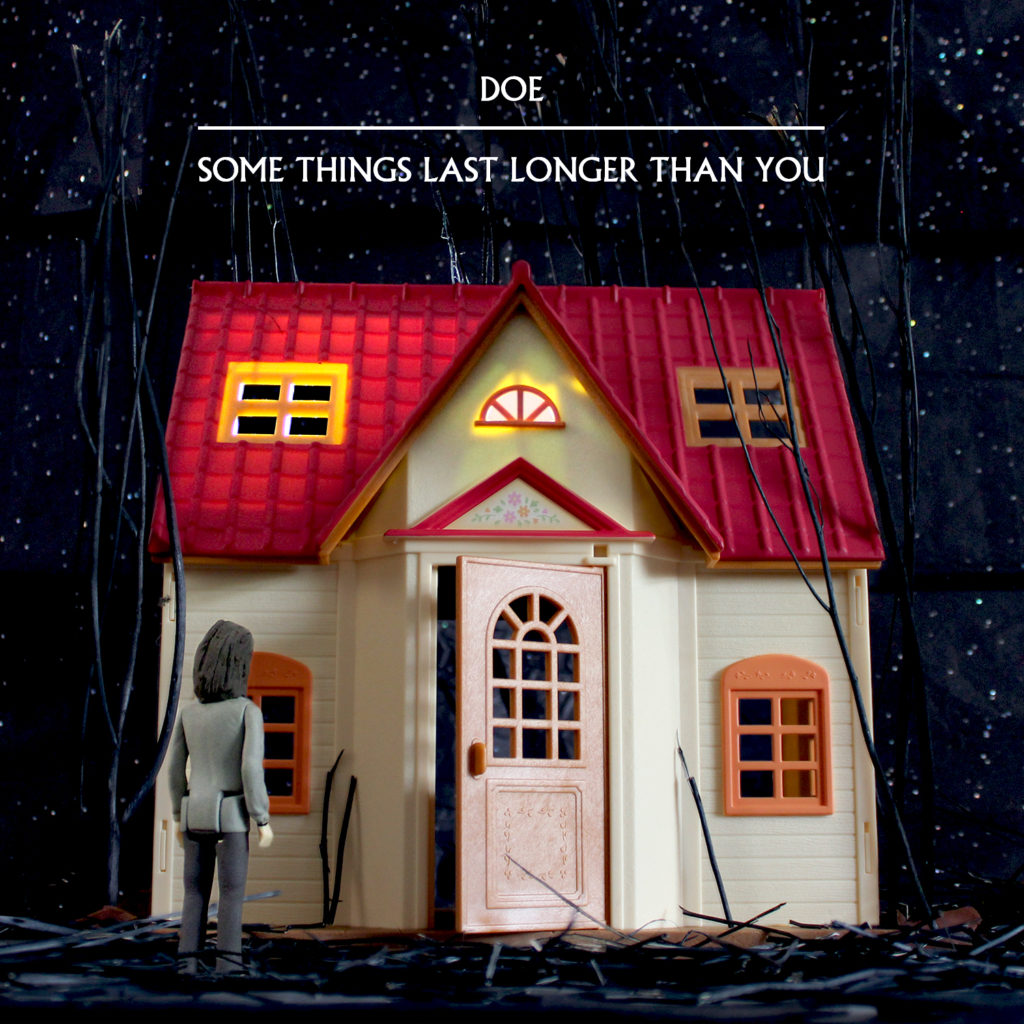 Some Things Last Longer than You is the first proper full length from Doe and to my mind is a seething miasma of trad emo, punk rock, indie rock and proto-grunge influences. It feels raw and angry, yet sounds both well conceived and well considered, with plenty of melody and hooks. For a three piece, the sound Doe produce is surprisingly huge and driving.

Right out of the starting blocks on No 1, I’m put in mind of the sludgy guitar sound of Hole, circa Pretty On The Inside, but with the added finesse of American Thighs era Veruca Salt. I’m also getting an undertone of Dischord Records style emo-shun-nal hardcore. As the album progresses, I feel myself being drawn in. Simultaneously, the breadth of the band’s influences becomes clearer, most obviously there is a real love being demonstrated for the likes of the recently returned Sleater Kinney, Throwing Muses, Bikini Kill and pretty much anything of note that either of the Deal sisters has been involved in over the last twenty odd years. It makes for a rather satisfying combination, particularly as it’s spiced up by nice girl/boy vocal harmonisation and back n’ forth’s (which is something I’m noticing as a bit of a theme for 2016 on both sides of the ocean, and it’s fucking cool). 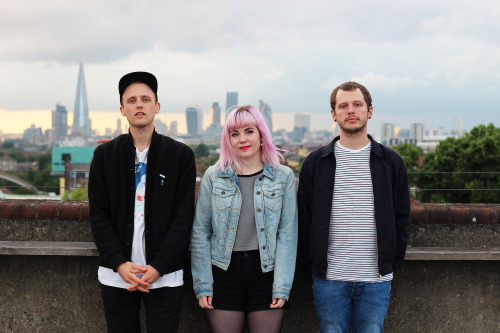 Thematically speaking, there seems to be a real sense of frustration and upset underlying this record, which is balanced out by a smattering of wistfulness and whimsy. Having read through the associated press material accompanying this release, yes, there is anger and frustration involved around issues such as sexism, particularly manifesting in the form of Nicola having had her own experiences (what I interpret as)‘mansplained’ to her. Just reading about that makes me pissed off on her behalf (not that she needs me to be of course). Other areas are also explored such as learning to stand up for yourself, and, most interesting to me, is one of the core themes of the third track and first single from the album, Sincere, which Nicola explained as “being continually undermined by someone who’s pulling the wool over people’s eyes”. Testify, yo! When you’ve been around a music (or other) type of scene for a certain amount of time (I’ve been quietly kicking around the UK punk scene for over 20 years or so now), you inevitably come across that specific type of person before too vast a stretch of time has passed. You know, those ones that are brim-full of utter bullshit and posturing. Those dedicated followers of fashion that it is so easy for some of us to see right through. But they seem to simultaneously seem to be bizarre magnets of popularity or something. Those people have always gotten under my skin, to be honest, particularly as they typically turn out to be the same individuals that take a grotesque sense of pleasure in spreading malicious gossip, not to mention belittling those that they deem not to measure up to their opinion of what / who is or isn’t cool or socially acceptable. Oddly those people will never say shit to your face if they are on their own (i.e. with no flunkies to back them up). It’s a proper ingrained schoolyard level of childish one-upmanship. Jeezy-creezy, you’d be forgiven for thinking I’m possessed by the spirit of bitterness or something (you’d probably be right). But yeah, those people that spoil it for everyone, they totally bum me out.

After that little rant / diversion, let’s bring it back to the matter at hand. This record has a real sense of raw honesty. It feels really genuine. Part confessional, part music scene critique. Something I think a good deal of bands could do with paying attention to, given the amount of shitty nonsense I’ve had the misfortune to listen to over the years, by the way. More bands should be this honest, and this willing to draw attention to the problems they observe. Turn Around certainly seems to demonstrate this, and I really like the way in which it builds to a soaring, impassioned crescendo toward the end of the track.

Respite offers something of a more gentle indie-folksy nature in parts, but also throws in head-nod inducing crunchy riffage too. Bizarrely, I’m put in mind of Siamese Dream era Smashing Pumpkins, as this was a juxtaposition of sounds they were able to pull off incredibly well. Although, I would hesitate to give any media exposure to that Corgan plonker these days, given some of the bigoted and broadly offensive crap he comes out with these days. 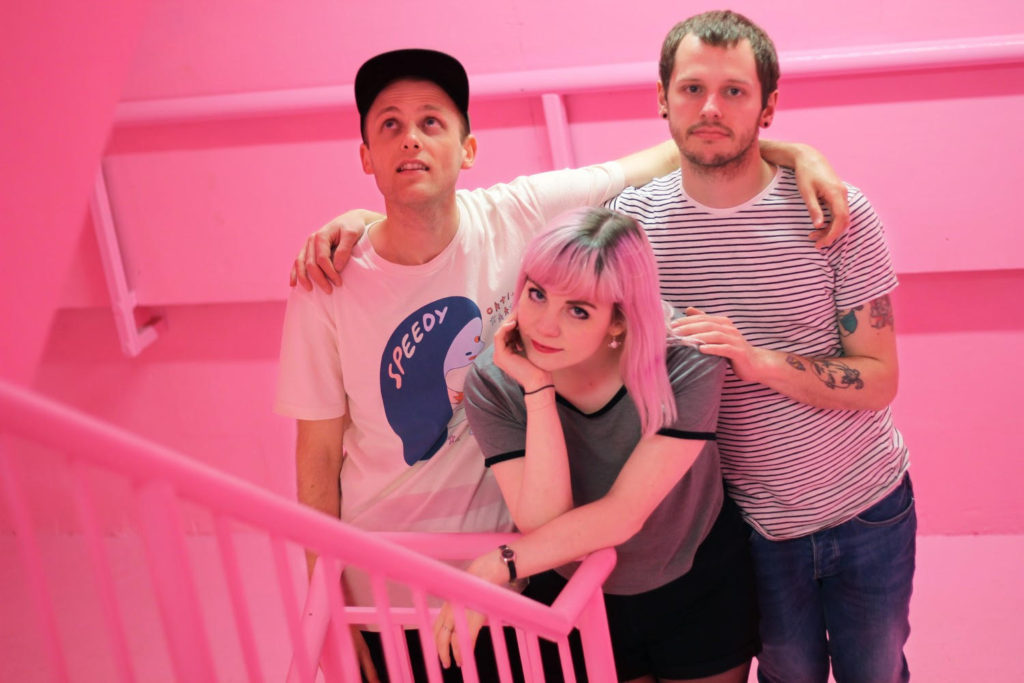 The more I listen to this album, the more and more I like it. In fact, the further through each listen I get, the better the album gets. A peak pairing of tracks for me are Anywhere and Last Ditch, which really showcase Nicola’s vocal range, the strength of these three as a song crafting entity. That refrain at the close of Last Ditch is incredible (“On and on I’m feeling helpless…”).

On 8th track, Before Her, we hear a direct switch around vocally, with (I’m guessing) Jake take the lead vocal (he has a strong voice in his own right) and Nicola harmonising. On Corin, there is in part a kinda Joy Division (ish) post-punk feel to some of the bass instrumentation, which couples nicely with a churning, screeching furious crescendos that just channel the ghost of Courtney Love on the Live Through This record. 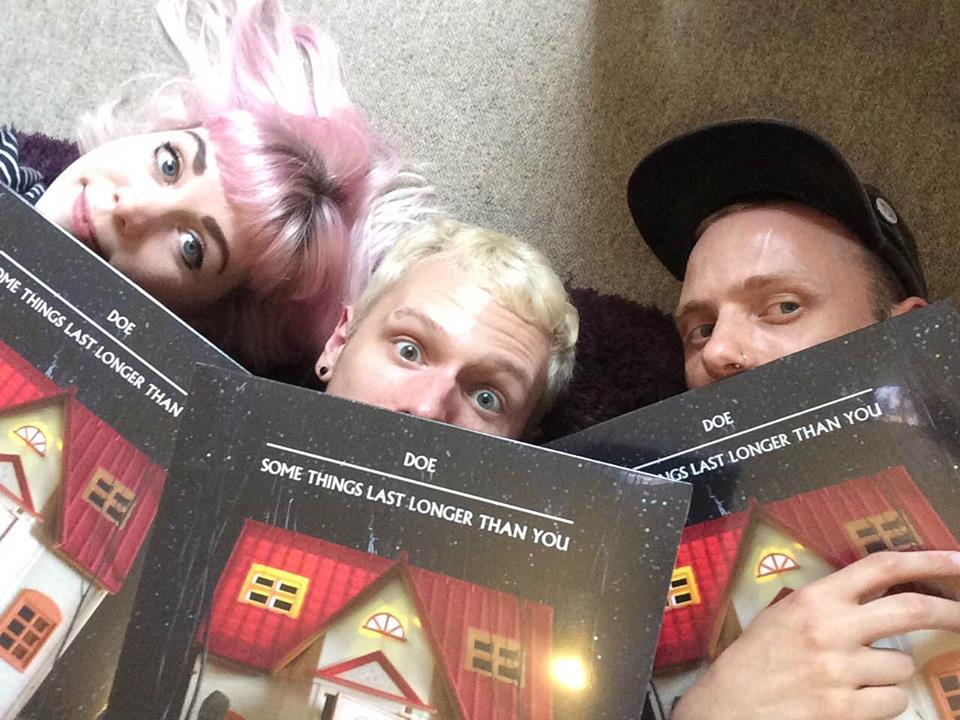 Hearing a record like this really makes me (oddly, perhaps) feel quite enthused about the UK punk scene (not that I really go to shows very much these days, primarily due to the type of people I was ranting on about earlier on). This record points (unless it’s my imagination, which I can’t rule out) toward a real growing diversity in sound and approach for the scene going forward. That’s the kind of thing that I think is particularly important in terms of inclusivity in terms of: i. people being able to feel welcome in the scene; and ii. for other people (mentioning no names here, because I’m allegedly a grown-up and everything, but jeez, I sure won’t let it drop will I?) learning to be more accepting of others and less judgmental.

So yes, Doe are, I think an important band for this particular point in time. By way of conclusion, if you were a fan of the indie rock / punk crossover bands of the 1990s, or the general alternative sound of that period, you’ll get a lot from this record, as you certainly will if you have a penchant for the first and second wave emo / post hardcore sound. I’ll warn you, though. This record has something of an addictive quality to it, though. The frankly fantastic Some Things Last Longer than You, is available to buy now from Specialist Subject (in the UK and EU) and to pre-order from Old Flame (in the US). Go forth and enjoy.

Now, being as this review is somewhat overdue, I have missed the opportunity to help promote Doe’s recent tour, but they do have a show booked for 27th November at The Lexington, in Angel, London, where they will play with Tellison. So go to that one and have a watch if you can make it along. I’m sure it’ll be a real good time.