Polyvinyl are a bit of a hot label for me right now. With a roster including recently reviewed bands such as La Sera, Jay Som and (the awesome) Julia Jacklin plus old favourites Ladyhawk and Japandroids. They are basically hitting home runs for me right now.

A lovely kitsch, electronic indie-pop band, STRFKR basically took me back in time to the distant past of 2009 or so – a time where there was a resurgence in this kind of music with bands like MGMT, Little Boots, La Roux and Digitalism doing the rounds. Indeed, it seemed that electro-pop was riding a huge wave for a few years. Gotta admit, I loved it. For me the highlight was spending pretty much all the 2009 Pukkelpop festival dancing away to the bands I mention. I don’t think I have danced that much in a year since then, aching knees and all that. Great fun. And one of my favourite bands from that time was Empire of the Sun – the band that STRFKR most remind me of with this album.

STRFKR hail from Portland, Oregon and Being No One… is their 5th full length album (and their third on Polyvinyl). They certainly are not new to the scene having released their first full length in 2008, as Starfucker, but for some reason these guys didn’t come across my radar in the late zeros. It happens – yet the name sounded familiar so this is kinda odd. Especially as their name is really rather similar to an awesomely great Nine Inch Nails song. For me, that would have gotten them noticed.

Heading backwards in time – I suspect I know why I didn’t pay attention earlier. Basically, this album has similarities to their older albums but it is not the same. Going into the back catalogue – I start to remember checking them out and just not being interested. The second album Jupiter is just dull. Take the poor music of Helen Love and remove the heart and fun of the singing and this is what you are left with. Tacky meh-pop. Fourth album Miracle Mile sounds along the lines of the second MGMT album – you know, when MGMT ran out of ideas and spirit and just put out an album of bland indie infused psych pop that missed the mark pretty badly. I can imagine listening to either of these albums and just not wanting to listen to more. Why the heck would I? But as I say, I like this new album and I liked the third, Reptilians. Reptilians is very much a standout – each song having a different sound and bouncing all over the place with shades of Cornelius, Go Team and Yoshimi… era Flaming Lips. This is an album I need to pay some attention to.

As I say, Being No One… reminds me quite heavily of the first Empire of the Sun album, a record that I listened to on heavy rotation for quite a few years. Maybe this album is nothing ground breaking in that regard, but that isn’t a bad thing. It is pretty clear to me that STRFKR have grown in many ways over the years. This album takes the promise of Miracle Mile, an album that sounded like a grown up version of the earlier albums with little heart, and shapes it into an album that I actually want to listen to. There is no denying that Miracle Mile was an evolution of the sound of the band – it was just not quite there. This record achieves what STRFKR were trying to do. 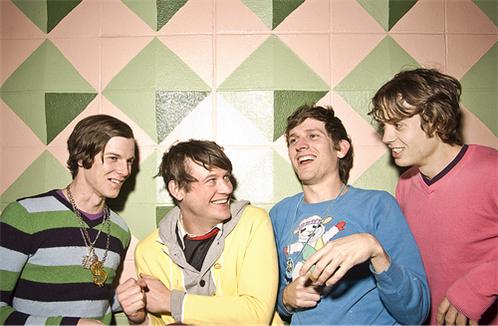 Being No One, Going Nowhere is nothing new in the grand scheme of indie pop, but for STRFKR it is the culmination of five albums resulting in one that I will listen to with my other ‘getting ready to go out’ records and maybe even bang on if I am doing an upbeat, poppy DJ set list somewhere. Especially Dark Days, from towards the rear end of the album. Not ground breaking, but proper good fun – as this sort of music should be!