It’s another of those situations I seem to periodically find myself in, when I need to review a new record from someone I know. Nay, a good mate from back in’t’day (vocalist and lyricist Ed ‘Beecher’ Godby, who I’ve known for 18 years or so). Thankfully, there isn’t going to be any awkwardness here, as it’s a right old firecracker of a record. Although, it’s slightly worrying to me that these lads describe themselves as ‘middle-aged’ and on the verge of ‘midlife crises’. Ed at least has just turned 34, but I’m due to turn 40 in a few short months. If he’s now middle-aged, am I now then classed as being ancient? What happened to those heady skate-mental days? The thrashing, the boozing, the shenanigans? They weren’t so long ago… were they? Now this serves as something of a non-introduction, so…

…Supergenius are something of a Belgium-based powerhouse. An awesome meeting of minds, if you will. There’s a real selection of talent here, with members having enjoyed a certain level of success with other musical projects such as the UK’s Beecher, and three Belgian groups -Rise & Fall, Oathbreaker and Wiegedood. Whereas these bands are obviously ‘heavy’ bands of varying styles, Supergenius is a different manner of beast entirely.

What we’ve got here is something of a more self-reflective, older-but-wiser feeling record. Rather than visceral, pummelling metallic rage, we’re presented with something in a more post-hardcore vein, with some real overtones of ennui, self-doubt and world weariness. Vincent (the bass player) explains that they had wanted to write a record with a poppier, happier sound. I’d argue that the record certainly doesn’t exude happiness (see my previous statement), and while the record is very accessible and melodic, it’s also too musically complex to be overtly poppy.

Supertired puts me in mind of a few bands in particular. Firstly, I’ll offer up Wakefield’s emo / indie rock heroes of days gone by, Pylon, purely on the basis that many of the melodies are complete and utter genius, and some of the guitar tones make an immediate mental connection to them (in my tiny mind). Seek out Pylon’s stuff on their bandcamp – it’s ace.

Secondly, I’d throw out there Washington DC’s The Dismemberment Plan. I found (and I’m not saying anybody else would) something in this record that really put me in mind of the off-kilter, mathy post hardcore of The Dismemberment Plan. I mentioned it to Ed, who said I was “very kind” but that “they’re much better and more complex than us”. Don’t sell yourselves short, lads. There’s a huge crossover in appeal between the two, if you ask me. Which nobody has, I’ll grant you that. But I’m telling you anyway. My review, my opinion. Alles klar?

Thirdly, fourthly and fifthly, I’d also offer up Failure (aka the Quicksand it’s OK to like), for the grooving undercurrents, (and possibly a bit weirdly) Cave In for the incredible rhythm section that drives this record along (obviously the non-overtly prog bits of Cave In!), and Fugazi for the smartly direct trad post-hardcore elements that bind these disparate elements together as a pleasing whole.

Personal highlights are tricky for me to single out, as this really is an accomplished piece of work that Supergenius have put together. Nevertheless, I shall of course do my best… The opening salvo of All That’s Gold and Charmer are an awesome one-two that firmly grabbed my attention. Acrobatics and A Serious Case of Impostor Syndrome (tracks 5 and 10 respectively, see videos) I’d also put out there. If I really had to be put on the spot and forced to pick a favourite, then I’d have to plump for Know Your Knots.

All in all, Supertired is a very satisfying release, and there was only one thing that I didn’t like that much. Namely the vocal delivery of a particular recurring line in the third track, Watch The Water (“from back to front she swa-ha-ha-hays” – sorry Ed!). But realistically, I’m being an overly fussy bastard on that one, because the track overall delivers all I could hope for. By way of further explanation, it’s just one of those things. I have an unreasoning dislike for vocal lines that break up words with ‘hey-heys” or similar. Maybe that’s not so weird -my brother-in-law has an unreasoning hatred for any songs that try to imitate or are reminiscent of trains… 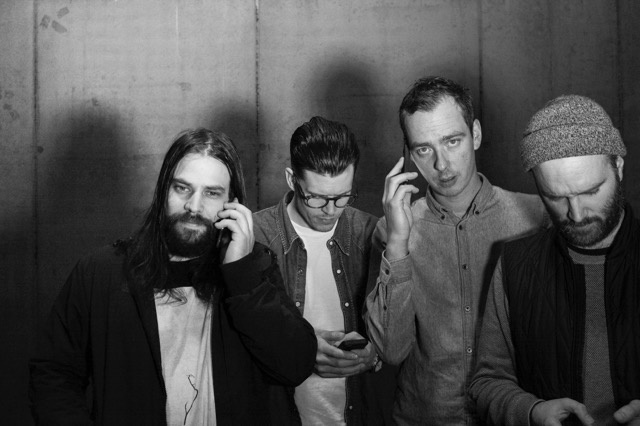 I’d like to take the opportunity to give special mention to Drifting Tonight, which gives me all the feels, speaking as it does of procrastination and being self-absorbed leading to more important things like the people you care about slipping off your agenda or radar or however you want to term it. So, it prompts a sorry from me to anyone I wasn’t there for when they needed me. It should also prompt people in general to be a bit more considerate of those around them, and y’know… Watch out for your mates.

Tony of Nurgle verdict: 9.5/10 – I can see this being in my end of year top ten. Not that I bothered compiling one last year, but, for what it’s worth…

You can stream it via Vice Noisey.

I suspect it will go up on the Supergenius bandcamp page soon enough, though. For the time being at least, their debut EP is up on there for you to check out.

You can pre-order the record here on LP / CD / MP3 – bear in mind that there are limited quantities of the limited edition versions available, so you snooze you lose!