I know you shouldn’t judge a band too harshly on their promotional material (even if it can be fun), but the blurb for this not only decides to throw in a Black Flag and Flipper comparison, but also makes the bold claim that this group “WAY angrier”. Now, admittedly, I’ve never seen this band live and am just basing this on the record, but they picked those words so they can live by them. As the saying goes – come at the King, you best not miss.

Opening track, Sex Dwarf starts off with what sounds like someone snorting drugs, and then gives way to a fairly slapdash bit of work. I can see where the Flipper comparison comes in at this point but it lacks the wail and the chaos, and the whole thing sounds pretty basic. It’s not helped by the drum backing, which for some reason has three hi-hat claps at the end of every bar in the intro/chorus. It reminds me of Fuck the Pain Away by Peaches. Well done there, then.

The lyrics to Sex Dwarf might have some comedy value, I can’t really tell. The vocals are distorted and I’ve never been great at picking out words. There’s a sex dwarf (I’m not a Dungeons and Dragon fan but I’m guessing this is something from that), there’s some lewd suggestions, it’s seedy but not really affecting in any way. There’s also the issue that it’s nearly half the bleeding record and it is quite easily the worst song. As far as ruining an opening goes, this is pretty spot on. 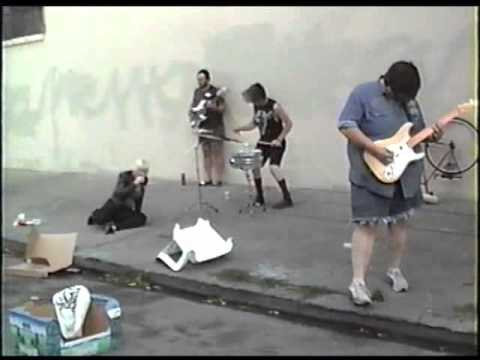 This is a shame, because the two middle songs are pretty decent. Amber Alert and Backhand have the violence you’d need for a Black Flag comparison even if it falls short of the mark. Amber Alert has a driving rhythm disrupted by the short vicious bursts that make up the chorus, there’s a short shriek of a solo and it’s over in 60 seconds. Backhand seems to compress the previous song into each verse and then pulls off a build to the chorus which is easily the best thing on the record; a climbing intensity to the tom hits, the guitar stops plucking through the chord and slashes at it instead. It’s not half bad.

The 7” closes on Gentle, which has a sloppy garage band sound to it, and the production is pretty terrible. It’s not as shambolic as the opener but it doesn’t really do much for me. I keep trying to think of something nice to say about it, because it’s not awful, but it feels like I’d be reaching. And really – fuck that. These people are adults and they committed themselves to this and some comparisons were made that do them no favours. I wouldn’t buy this, I wouldn’t recommend it, and I doubt I’ll ever bother with it again.

In typical Apathy and Exhaustion fashion, we’d invite you to listen on the band camp player below, and form your own opinion

If you dig it, you can buy it from Drunken Sailor here