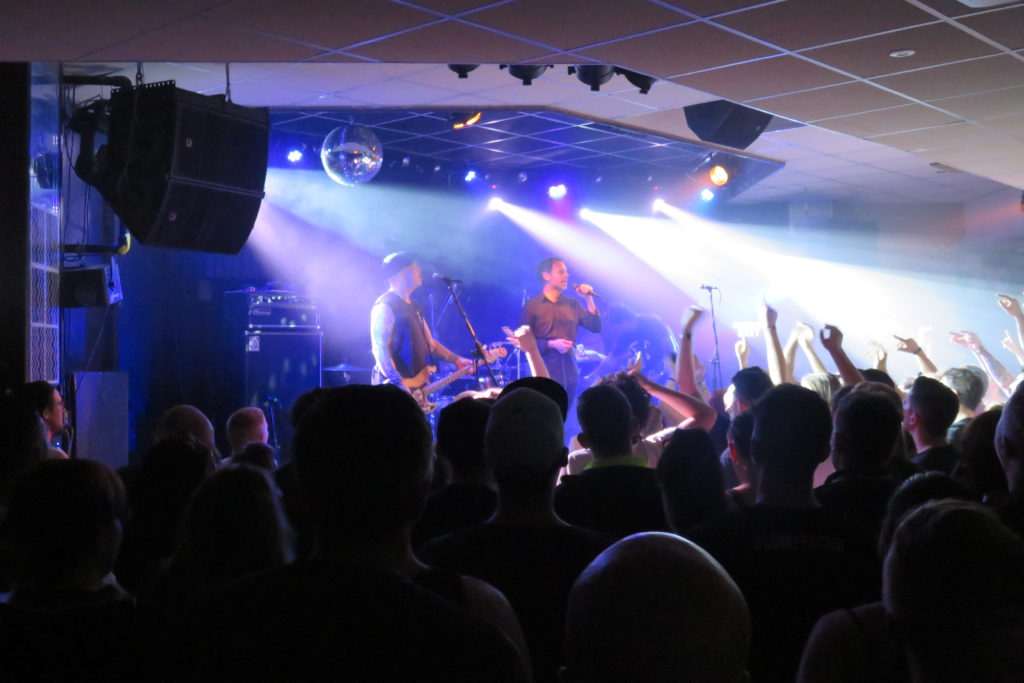 As a rule, old people like my wife and I are actual lunatics about arriving at social functions on time. Don’t matter if it’s a 12 year olds birthday party or a punk show, we don’t wanna miss out on the good seats or the buffet dinner. On this occasion however we had underestimated the traffic round Leeds 6 meaning we turned up too late to catch opening act Hot Mass, walking in just as Great Cynics were taking the stage. A power trio from South East London, I hadn’t heard these guys before and clearly I was the big idiot once again because there was a respectable crowd assembling to watch them. No mean feat considering it was A) a Monday night and B) as hot as balls. 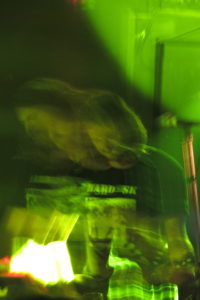 The stage chatter coming from vocalist/guitarist Giles Bidder and the new bassist was pretty weak, irritating me to the point where I considered nicking off to the bar for a tin of pop. But once they got down to the business of playing their songs, well, I am glad I ignored my inner Oscar and pulled my shorts out of my butt. With songs celebrating the simple pleasures of kicking about with your mates and lashing a bag of cans, there’s something uniquely British about Great Cynics. At risk of showing my age here, but musically they reminded me of Weston’s more rough hewn moments along with a healthy dose of Menzingers worship. Tracks taken from new album Posi appeared to have a more raucous experimental edge and were backed up lyrically with some personal politics (‘Don’t buy the fucking Sun newspaper’) that I can support entirely.

Whilst my personal preferences on the melodic spectrum sit more towards the Samiam/Seaweed/Leatherface end of the table, Great Cynics had enough pop sensibility, angst and perspective to keep me interested until they closed out with a sluggish version of Cornershop’s Brimful Of Asha which was definitely more 33 than 45. Good stuff though, check out their bandcamp HERE and sample Posi HERE 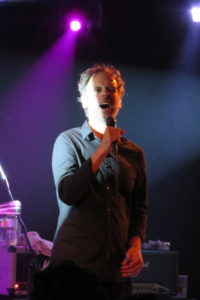 Is it possible to have a crap time at a Bouncing Souls show? My experience has always been to the contrary. But cramped into the confines of the  Brudenell Social Club in that abhorrent heat, I just wanted to be anywhere else. However, such dismal thoughts were exorcised the moment the Souls took the stage. Opening with the immediately pleasing ‘That Song’  guaranteed to set the tone for the rest of the evening. With great shit eating grins plastered across the crowds faces and voices raised in song, New Jersey’s finest boys blasted through a set that drew from all era’s of their formidable catalogue. Lean On Sheena, Hopeless Romantic,True Believers, Manthem, Late Bloomer all showed up to the party alongside choice tracks like Driving All Night from last year’s Simplicity. The wonderful thing about Bouncing Souls is that their joyful delivery, reflective lyrics and boundless enthusiasm ensures that even the songs I wasn’t so familiar with still managed to make me feel all warm inside. Awww.

To stop this getting too gooey, I’ll take this opportunity to quickly comment on the overall poor quality of the stage dives. Maybe I’m spoiled because I spent my youth going to hardcore shows where maniacs hurl themselves into the void with reckless abandon instead of bugging the band whilst they are trying to play and then flopping off the stage like a slowly wilting erection. Go watch a Cro-Mags video, raise your game. 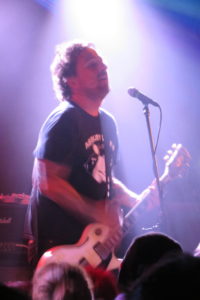 Bassist Bryan Kienlan reminded me of a Tasmanian Devil in a scally cap, the dudes enthusiasm is unrelenting and he pours so much heart into the performance that it’s impossible to not be moved. Maybe it was the Asbury Lanes shirt and the power stance but guitarist Pete Steinkopf was throwing out some serious Springsteen vibes. Frontman Greg was on fine form, resembling a combination of Henry Lee Lucas and your Dad dancing pissed at a wedding. And whilst self described ‘deep cut’ Punks In Vegas was an unexpected treat, it was Gregg’s poignant acoustic performance of Ghosts On the Boardwalk was the real hidden gem for me tonight, his gentle vocal delivery as soothing as midnight waves breaking against the Jersey Shore.

And all too soon they were done. Sending us out into the balmy Leeds night with the refrain of closer Gone echoing in our ears, a suitable end to a truly triumphant evening.