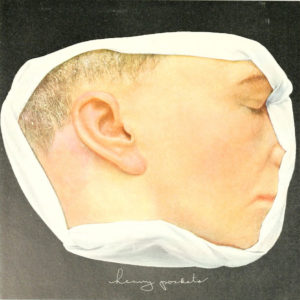 You know something, I am really glad Tony sent me this one over to review. It’s been a tough week and there’s only so much bruising metallic hardcore, bowling around swinging its dick in my face and shouting the odds that I can tolerate at this fragile juncture in my life. Blessed be then, the arrival of New Hampshire trio Heavy Pockets and all their charms. They have provided the remedy to my woes with their second album Mopeless, thirteen songs of spiky fuzzed out indie punk rock. Like wot they made in the 90’s.

Back in 2002 I found myself wandering around at some indie rock festival at Butlins in Camber Sands of all places.  My brain buzzing from far too many Coca Cola’s I happened upon a post-gig knees up in some tacky bar, whereupon a wasted Kim Deal trod on my toe as Bob Weston of Shellac span a Minor Threat song on the turntables. She turned to me, smiled and said ‘Oh I’m sorry baby’ before she slipped/stumbled away into the crowd on serene waves of mutilation. Kim Deal called me baby. Or honey. I dunno, something like that. Look, the point of that insipid anecdote is to set up my assertion that Heavy Pockets sounds a lot like Kim Deal dancing on my toes whilst listening to Minor Threat.

When Circadian Schism kicks things off and Shayla Riggs’ divine vocals arrive, well I couldn’t believe my luck. See, she opened her mouth and for a split second my beloved Tanya Donnelly’s voice fell out. The Belly comparison ends there though and that’s fine. Heavy Pockets discordant and occasionally jarring indie rock has more in common with the schizoid jangle of The Breeders or Pretty Girls Make Graves than the hazy dream pop of Rhode Islands finest. Third track We is about as straight forward a punk song as you can expect to find on here and it is quite flipping lush. Whilst Riggs’ charismatic voice and barbed, witty lyrics are the immediate hook, the two guys behind her holding down the rhythm are rock solid and provide a robust framework to the songs.

Not Yet meanders in with a disarmingly maudlin vocal intro before twisting into unexpected shapes and employing that quiet/loud dynamic that was a staple of Black Francis’ song writing. Wonderful. I can’t decide if it’s the tectonic drums and bass or whether Riggs has intentionally summoned the vengeful spirit of Louise Post, but Dragonology Part 2 lumbers into view with a distinctly ‘American Thighs’ flavour to it.

Some of these songs would be at home on one of those perfectly curated soundtracks from the 90’s. The ones where the selection of songs on offer are often infinitely better than the movie they accompany (I’m looking at you Judgement Night?). Don’t be deceived though, Mopeless is not content to merely serve as an exercise in flannel bedecked nostalgia. It’s just that I’m old now and my frame of reference is a bit out of date.  There’s fresh  ideas a plenty and Heavy Pockets are not afraid to raid the blissful territory occupied by the likes of Best Coast or explore the realms of off-kilter angst over which the Crutchfield sisters reign supreme. Mopeless is crammed to bursting with wonderfully skewed pop songs. It’s a scuzzed out/  over caffeinated ‘all you can eat’ buffet of fever dreams and wistful melodies and I simply cannot get enough.

Belligerent speed doom lunatics Scissorfight once boldly proclaimed that ‘New Hampshires alright if you like fighting’. Without wishing to speculate upon Heavy Pockets pugilistic abilities, it turns out that New Hampshire ain’t so bad if you like jarring bittersweet alt rock either.

Check this slice of wonder out on the Bandcamp player below:

You can pick this up from Dead Broke here on 12in. Cassette version also available.