So I thought I had my thoughts together for this 7″ review. Thought I had it all sorted. A queer band from Durham – ace. Always happy to fly the rainbow flag when I can. I’d had the songs on repeat for a few days, to let it soak in and absorb whilst I did some painting (a black dragon mini if you are interested).

I was at the point where I could mumble along with words that were about as right as they were going to get during the choruses of the songs. “Hmm,” me thinks, “Those two songs are OK. Not amazing but fine.” A few years back I may have been more excited, but these days I have a back log of garage rock bands and, personally, I am rather over the whole genre. Still, add the LGBT+ aspect and I’m happy to recommend it. Shame they missed the boat (for me), but maybe for others it will do the job – I’ll push that. Two songs that are pretty fine. 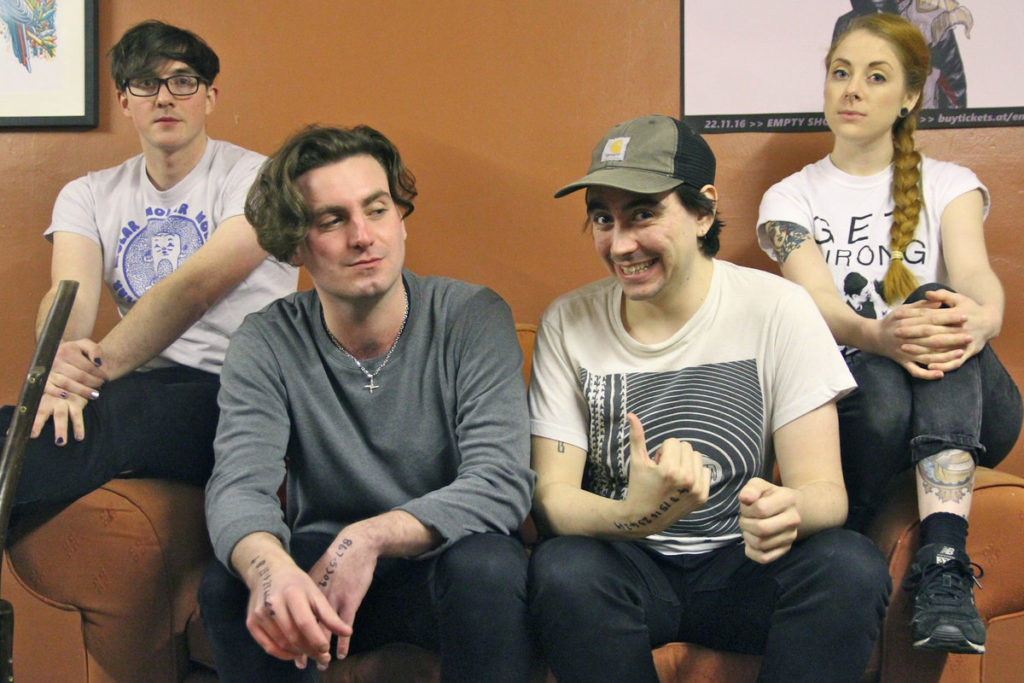 So what does this mean? Well, the truth is that the songs do not stand out from each other all that much. Sure, I could tell the songs were somewhat different. And sure, I had come to distinguish the songs enough to hum along to the choruses. But, at the end of the day, each song was pretty damn similar and I had no idea there were actually so many songs on the record I was listening to. Basically, I felt like it was four variations on the same song.

OK, it is a 7in – but, surely one of the songs could stand out right? Even if it was a ballad that seemed forced? Maybe a shouty song? A little more distortion on this one, a faster tempo on that one? Even if one sucks, just having something different on there would have helped. I can’t even come close to choosing a fave ’cause there is nothing to distinguish them. And yes, I paid a little more attention upon the revelation. Still nothing.

I had a listen to the band on in the internet, and to be honest the other stuff out there by ‘Pale Kids’ was so different that I’m not sure that it ain’t different bands. I did find a first album and, well, I really disliked it. At least I thought this was kind of OK. I won’t be listening to it again though. Is that progress? I’m not really sure. I dunno, it is only a 7″, but man, at least try to write a few different songs.

Well, there you have it. Four versions of a decent song (I actually thought it was reasonably good – kinda like The Undertones meets The Cure, by way of Kenickie before they got big. If you like Martha, you’ll dig this – Tony).

But, maybe you will feel differently. Have a listen on the bandcamp player below and see what you think.

You can pick up the record here from Drunken Sailor