Ah! Now this is has made for a very refreshing and invigorating start to 2018. Bikini Cops are from Perth, Australia. Before whacking this on, I had no idea what to expect. Not sure what kind of image the band name was trying to form in my mind. Cops in bikinis? Pigs in cop uniforms policing bikini wearers? Pigs in cop hats and bikinis? And so it goes on…

Musically though, this treads a bold path sitting somewhere between the vigorous 1982 style Californian hardcore nostalgia of OFF!, the DC sound encapsulated by Rites of Spring. I guess I’m also feeling that specific late 80’s sound found only in the UK, where bands like Ned’s Atomic Dustbin and Mega City Four were flirting with where the boundaries of punk rock and indie crossed over. Either way, this is tickling the fancy of several strings of my musical listening past. Australians will no doubt also pick out the influence of The Saints, but there’s a classic band I’ve not got around to thoroughly (or indeed partially) investigating as yet.

Anyways. Do yourselves a favour and get this checked out quick-smart on the Band Camp player below, because it’s as spirited as fuck.

What more could you hope for than 6 blasts of furious, stomping punk rock on a 7in record? If you have any kind of acceptable attitude toward music, then no doubt you will find this release as satisfying as I did. If you aren’t down with this, you’ve just proven yourself to be the worst kind of clean-shirt. Do not pass go. Do not collect £200. Go directly to jail. 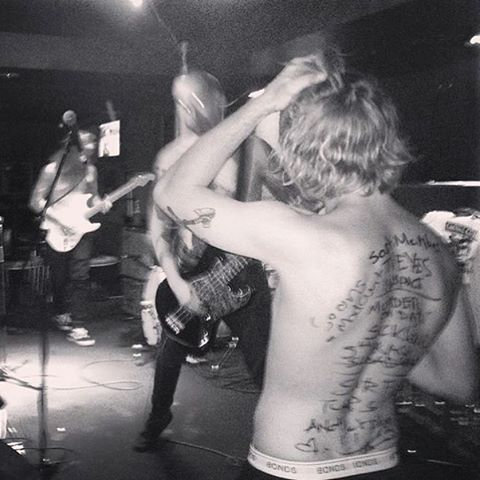 You can treat yourself to a 7in record on yellow (if you are quick) or black (if not) from Drunken Sailor Records. If you are in Australia, get it from Televised Suicide here