On their third full length album, Sumac take their rightful place as the Kings Of Heaviness. Although the band’s three members have performed in some of the most forward-thinking acts over the last 20 years, the sound found on “Love In Shadow” is bleak, austere and awe-inspiring. You could pinpoint to other bands that may seem like obvious influences – the wild freewheeling guitar psychedelia of Bo Ningen or Acid Mother’s Temple, the tight chugging hardcore/metal hybrid of Converge– but the approach Sumac take is much more individualistic and hard-hitting on a sonic and emotional level. The sound is so dense, dark and draining – precisely how a truly great heavy band should sound.

“Love In Shadow” presents four songs clocking in at just over an hour of music, pushing their experimental sound further into the outer reaches. The gargantuan opening track “The Task” itself holding several absolutely jaw-dropping moments. As the frenetic guitars and rhythms begin to collapse and cave in on themselves around the 6 minute mark, a lone strummed guitar line – whose tone occasionally breaks as guitarist Aaron Turner noisily switches between pick-ups – quickly gives way to a lurching, monolithic rhythm and shiver-inducing melody that descends further and further into darkness. Aaron’s growl is deep and guttural, occasionally giving way to an ungodly howl which delights and terrifies in equal measures. 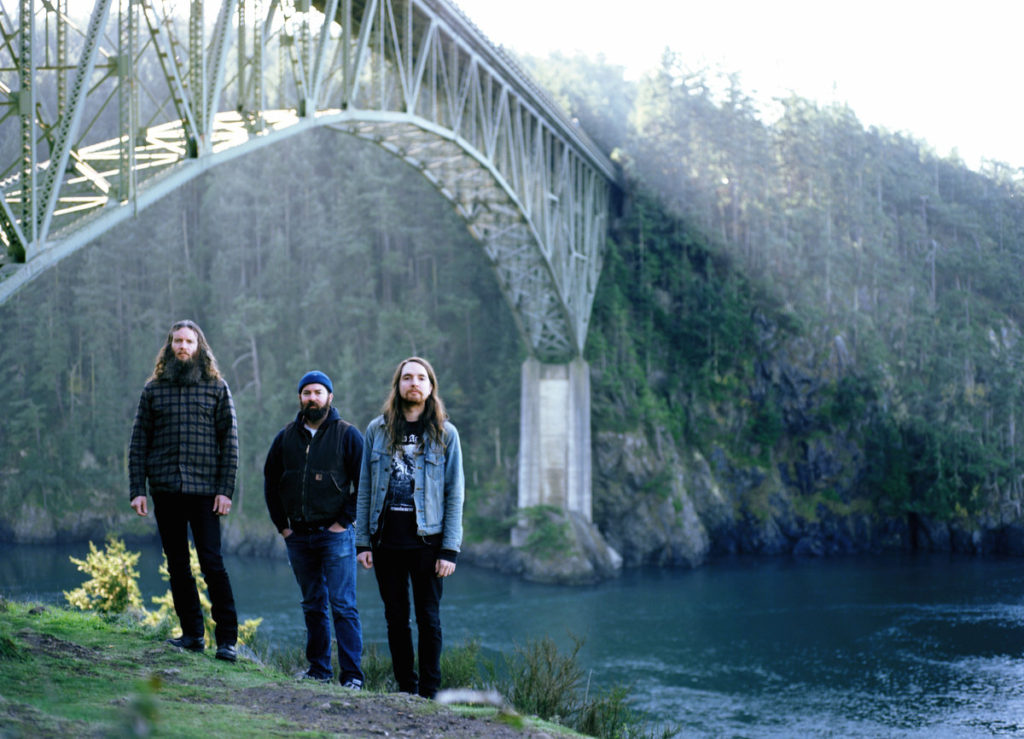 Further through the album, guitars rage and ascend into a shrieking chaos of feedback and effected distortion (“Attis’ Blade”), heavily distorted bass lines and drum rhythms groove with a foreboding intensity and collapse in on themselves in terrifying fashion (“Arcing Silver”) and song structures and given wholly over to abstraction to create a prolonged creeping sense of dread (“Ecstasy Of Unbecoming”).

The band’s rhythm section – legendary four-string master Brian Cook and crust-punk veteran Nick Yacyshyn – lock in on some truly mind-bending abstract and pummeling rhythms, lurching and re-arranging on a whim, creating an unsettling, off-kilter foundation for Aaron’s wild oft-improvised guitars. This fusion of precision and chance creates a sonic tapestry that is as murky, jet black and horrifying as it is colourful, warm and enchanting.

You can stream this album via the bandcamp player below:

The album is available via the Sumac bandcamp page on 2xLP pressed on virgin vinyl, packaged in a wide spine jacket printed on uncoated stock with custom high gloss slipcase, as well as CD or digital download.