If you are even older than my old ass, you may remember a band called The Accused from way back when, who were considered to be one of the leading lights (or frights might be more applicable) of the emergent crossover thrash movement. They released what the arts and culture section of The Guardian would probably refer to as a “cult classic” called The Return of Martha Splatterhead.

In fact The Return of Martha Splatterhead was my first introduction to the band, and their self-proclaimed “splattercore” sound (so named due to a heavy yet tongie in cheek horror / gore / slasher theme). This was in 2005 or so (I think, although the record originally came out in 1986 when I was 9), and coincided with a timely repress around the time of the crossover revival that was being spearheaded by Municipal Waste and so on. But yeah, it’s class. Go listen to it on the internet and find out. Martha Splatterhead became something of a recurring character / mascot throughout their career – kind of a zombie girl type deal…

Anyway, they also did a load of other stuff you can also try and track down.

So here we are in 2019, and the band has had some kind of minor name shift due to former band members falling out no doubt, hence the addition of A.D. to their moniker. I guess kind of like the Cro-Mags but less stabby, FLAG vs Black Flag, or Jello Biafra vs Dead Kennedys but doubtless less contentious. Who knows? The Ghoul in the Mirror represents a reunion of sorts, as well as featuring the drummer of Poison Idea, Mickey Widmere. 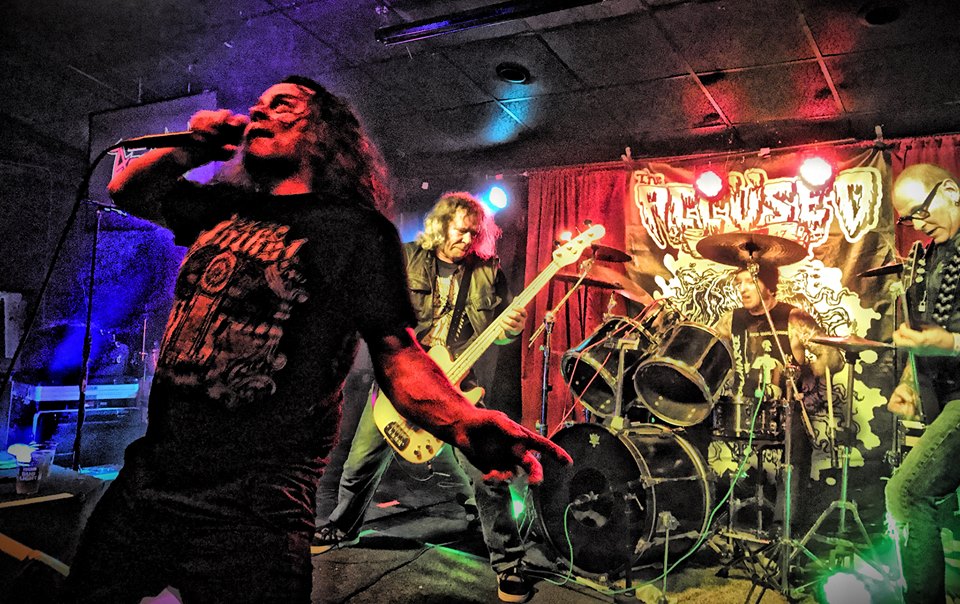 This is gnarly, man. Pretty much what you’d expect from a band with the aforementioned theme. The Accused A.D. rip through some savage thrashers which are peppered with enough blood and guts and visceral violence to appease Freddy Kreuger’s, Jason Voorhees’ and Michael Myer’s collective lust for arterial spray and the casting about of viscera and offal.

At times the offerings thunder and shred along all tighter than a gnat’s chuff and shit, but at other times it gets a bit slipshod and sludgy in a way that fans of D.R.I and the like will find particularly pleasing. Interestingly enough there’s been some involvement from Scott Hull of Pig Destroyer in a mastering capacity, so it’s no wonder listening to this makes me want to saw someone’s skull open and use it as a latrine, particularly when you take into account Blaine Cook’s evil as fuck vocal delivery… I’ll throw out there Eating Teeth as a particularly grisly example. 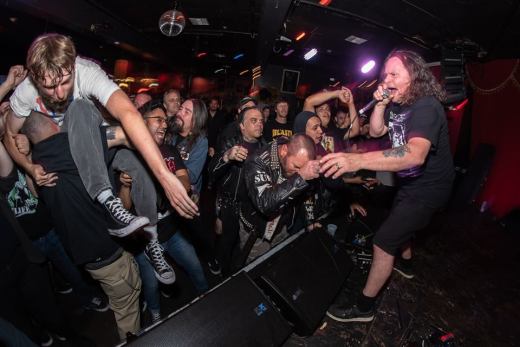 It’s not all shits and giggles though. I could totally do without the cover of Rick Derringer’s Rock n’ Roll Hoochie Koo, even if the Accused A.D. have managed to up the sleaze quotient to ludicrous levels and simultaneously showed the original up for the sinister number it is. However, this is more than made up for by a whole raft of decent crossover such as Pick the Sores and Prison Gig to name but a couple of stand-outs.

Overall, this is decent enough to warrant a Tony of Nurgle rating of 8/10.. Realistically, would I put this on over The Return of Martha Splatterhead? No mate, I wouldn’t. If I couldn’t put my hands on that, then this would certainly fit the bill, and it’s getting a lot of plays on the CD player in my car right now. Shout out to Blaine Cook for winging me a copy over from Seattle! Much appreciated!