Maniac are without a doubt my favourite current hardcore band. They are legitimately ill as all hell and my habit of wearing a Maniac T-shirt to the gym got me into a heated exchange with an off duty cop who took exception to it. Every time I listen to this band I feel like I’m being beaten with a barbed wire wrapped baseball bat whilst Den Of Iniquity plays at ear splitting volume on repeat. If you are not a “soft” and that sounds like something you can get down with then I beg you immediately go listen to their most recent full length, War & Insanity on New Age Records. (in fact, fuck it, I’m lobbing a bandcamp player in this article down below, because I’m good like that, me – Tony of Nurgle) I contacted frontman Will Hirst to try and get under the skin of Maniac and here’s what he had to say.

(Once again this interview was supposed to appear in the last issue of Harder They Fall zine, but fuck that noise.)

Nathan Bean: Will, I know very little about your band, but from what I cant tell you have your fingers in a lot of other pies with Restraining Order and Gate 4…what was the spark that started Maniac?

Will Hirst: I started Maniac in the summer of 2010 with my friend George. I wanted to front a band and wanted to do something fast and more on the hardcore punk side than Revenge which both me and George played in at the time. We recorded a demo but had a hard time keeping a lineup together and I honestly kinda hated fronting a band in the beginning because I felt naked not being behind a drum kit. So it kinda fell apart. In 2013 I reformed the band with a new lineup and started playing again. This is when we started to develop more of the sound that we play today.

Restraining Order is my other band that I play drums in, much more classic Hardcore Punk influenced, a lot more upbeat than Maniac, and generally more fun. Gate 4 is my studio and rehearsal spot and kind’ve the headquarters for a lot of me and my friends’ activities.

Nathan Bean: I read that the lyrics to Live Crucifixion were about exploring the ugly aspects of one’s personality and not repressing them. I completely agree, and think that acknowledging and accepting those negative personality traits rather than ignoring them or bottling it up makes for a more complete human experience…but how does one exercise those traits without going to fucking jail?

Will Hirst: Human beings are complex. Everybody is a hypocrite and everybody is selfish to some extent. Myself very much included. While I generally don’t advocate senseless murder, I certainly have days where I want to tie someone up, beat them to a bloody pulp and dump them in a river with their feet cemented. I guess the point of a song like Live Crucifixion or No Fucking Heroes, is I’d prefer a little more honesty from people in my day to day life. Virtue signaling is disgusting. Ten to twenty years ago we only had to deal with Bono pretending to be Jesus Christ or George Clooney’s academy award acceptance speech. Now every single person I know uses social media to present themselves to be anything but the dog shit they are. It’s disturbing to me how quick some people are to tear someone down to further their own ego without taking any actual objective measures. We’re living in scary times.

Anyways, how to avoid jail? Be smarter than most people. Interpret that how you wish.

Nathan Bean: Further to that, Maniac’s sound is absolutely seething. Drawing influence from Jap hardcore and the classic Clevo stuff like Promise era Ringworm and the In Cold Blood 7”. A lot of contemporary bands try to emulate that magic and it lacks bite but Maniac has succeeded in creating an album with some fucking teeth that brings to mind those records but doesn’t sound like a carbon copy. What are the personalities within the band and the circumstances outside the band that conspire to make such a vicious album?

Will Hirst: Maniac is a band that draws from a very wide range of influences, musically, lyrically and visually. When writing songs, I never want to put myself in a box because sometimes I find inspiration in not so conventional places. When writing the new record, I knew I wanted to make a record that I would want to listen to. I thought about records I loved, their sequence, their overall arc, I thought about my own history with them and how I could apply that influence to my songwriting.

Nostalgia has a place in the songwriting for this band. Maniac in a lot of ways is the band I’ve been wanting to do since I first discovered hardcore half my life ago. I wanted to tap into the gritty and street feel of the records that changed my life. Records like Age of Quarrel, Victim in Pain, Hear Nothing, See Nothing, Scum, Systems Overload, Damaged, Earth A.D., plus all the Clevo and Japanese Hardcore you mentioned.

I’d say the scene and the environment this band is in absolutely influences us because there isn’t very many bands like us in hardcore today. We play extremely anti-social music. We don’t want to be like any other active band and were completely okay with having a small audience. I really like your description that the new record “has teeth” because I kind of wanted this record to overwhelm and wear the listener down. If you’re still about it after listening all the way through, you’re on our team. 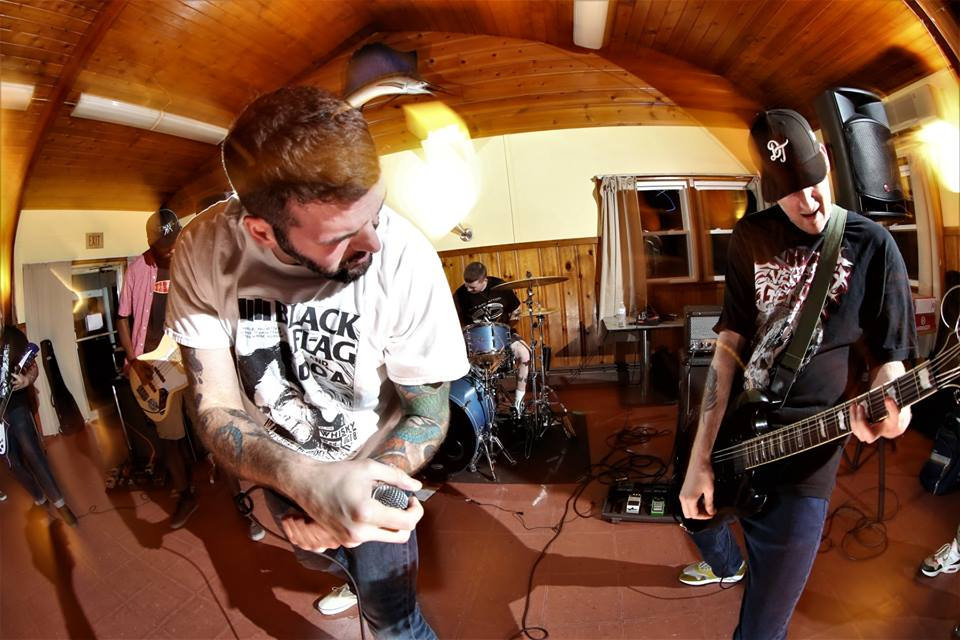 Nathan Bean: I noticed that the Nosferatu type artwork on your shirt is the self portrait that Henry Lee Lucas drew when asked how he saw himself….if you were asked the same question what would your drawing look like?

Will Hirst: Very fucking hairy. Very fucking handsome. I love the Lucas portrait. People might think we’re trying to be edgy using that but I’m not trying to front, I’m a civil person. I just really like that design and think it fits our music. Going back to the nostalgia bit, I definitely wanted this band to have a visual aesthetic that excited my senses in a way that I felt when I use to go to old comic book shops and independent video stores when I was a kid. That design hits the spot for me. I think our last few record covers do that too.

Nathan Bean: You were in Revenge. That band was great. Give me a good story from a Revenge tour. Vandalism, tour crimes..things of that nature.

Will Hirst: Thank you. Trouble seemed to follow Revenge everywhere we went but in all honesty we were pretty mild mannered people. There was a time though in Massachusetts where our shows were exceptionally violent and we were blacklisted from a lot of venues. One of the greatest compliments we ever received as a band was when someone told us that our shows were in the same league as Blood For Blood shows in the 90’s as far as sketchiness and violence goes.

As far as I can remember the places we were banned from were: The Chop Shop, Club Oasis, Rad Skatepark which were all venues in MA, the scenes of Cleveland and Dallas for destructive behavior at venues, and about half of Europe due to our “offensive” music video. Other than that, we were well behaved people for the most part.

Nathan Bean: What was your “in” to hardcore? Like what was your first exposure to the music and what was it that made you want to be a participant?

Will Hirst: I kinda got into hardcore in a roundabout way. I guess my earliest exposure was seeing bands like Hatebreed and Sworn Enemy at Ozzfest in ‘02/’03 but that led me more into metal and metalcore than it did hardcore. It wasn’t until the mid 2000’s that I started seeing hardcore bands in an actual show setting, starting with whatever bands I could see in my area then venturing off to other areas of Massachusetts. Some of the bands that I saw around 2004-2007 that were really impressionable on me were Shoot To Kill, Death Threat, Palehorse, Righteous Jams, Hammer Bros, Terror, Shipwreck, Down To Nothing, Guns Up, Have Heart, and Mind Eraser to name a few. Music streaming and youtube were in it’s infancy at the time, shows still felt somewhat underground although I’m sure there’s an old head that would disagree. I took advantage of file sharing and really dove deep into old hardcore. Discovering bands like Cro-Mags, Black Flag, Discharge, Integrity, Agnostic Front, GB, YOT, Negative Approach. A lot of this might be selective memory because I liked a lot of bad hardcore at the time too haha. Older hardcore really sealed the deal for me. I love the history of this subculture and I’m always discovering older bands that blow my mind.

Being an awkward depressed teenage outsider with no backbone, the hardcore scene was really attractive to me. Things like straight edge and scene camaraderie gave me a lot of much needed confidence at the time. I literally couldn’t give a fuck about high school, hardcore was all that mattered. 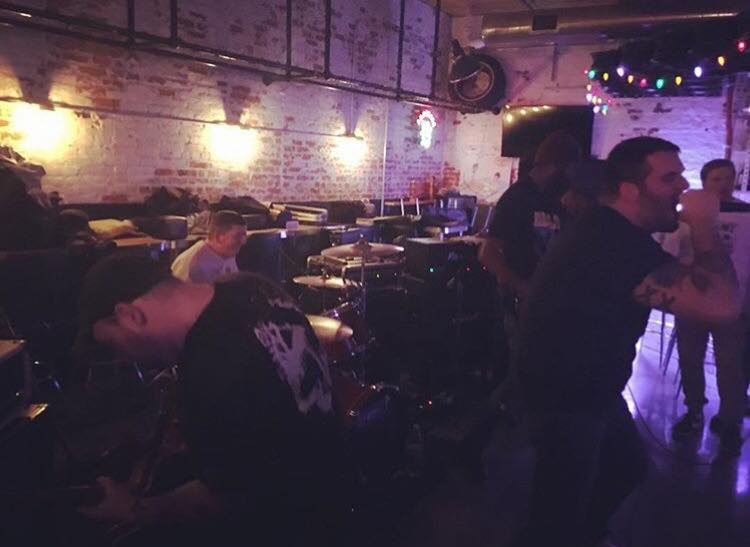 Nathan Bean: I don’t know much about Western Mass but I’m always curious about local folklore and weird shit….you guys got a fucking lake monster or a serial killer or something over there?

Will Hirst: No lake monsters that I know of. I grew up in Northampton, MA which was most of the time a pretty boring, liberal college town.

We had a serial killer nurse at the veterans hospital when I was in grade school. I think her thing was purposefully overdosing patients in an effort to save them and be a hero. (See that shit? This is what I’m talking about in songs like Live Crucifixion and No Fucking Heroes) Not bloody enough for me to further explain.

My older brother was friends with a kid that went on to be a serial arsonist. He killed two people with his fires, but I don’t believe murder was his intention. I think he just got off on fire.

I remember when I was in 2nd grade, some high school kid stabbed the shit out of another high school kid outside of a pizza parlor downtown as revenge for being bullied. I didn’t witness it although I believe I was in the vicinity that night. This was probably a year before Columbine, so it was pretty shocking to most of the town.

As far as supernatural stuff, the abandoned State Hospital was a classic spot for ghost shit before it got torn down and turned into apartments. Ghosts never really scared me too much, I was always more afraid of tetanus or getting stabbed by a bum at the state hospital. That’s reality, ghosts are bullshit. Anyways, Northampton is pretty tame and whitebread. Holyoke and Springfield, 20 minutes south of where I grew up was where a lot more sketchy crime took place but I don’t really have much to say about that. I had the privilege of growing up in a nice area.

Nathan Bean: Whats next for Maniac?

Will Hirst: No plans to make any new music at the moment, pretty happy with our new record and glad we have some new comrades that understand it. The plan right now is to continue being a fucked up alternative to current plain ass hardcore trends. I love hardcore but I’m growing increasingly jaded every year, however I have a shed of optimism that some cool shit is on the horizon.