A very brief history of The Queers for anyone who doesn’t know. The band started in the 1980s in New Hampshire putting out some really great punk rock. However, it wasn’t really until their pop sensibilities shone through that they really blew up. They were one of the more prominent Lookout Records bands in the 90s and put out Love Songs For The Retarded and Don’t Back Down, two must have records for any pop punk fans. Their other stuff is good too, but those records in particular are pretty genre defining. Since then they have continued to put out their patented Ramones meets Beach Boys records and have toured relentlessly, making them one of the hardest working bands I can think of, so lets see what their latest record ‘The Queers Save The World’ has to offer. 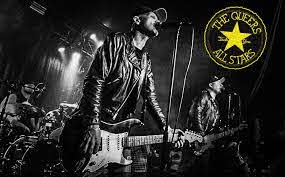 As we hit track four things slow down a bit, ‘My Hearts In The Right Place’ would fit right into a 1960s doo-wop set; it’s the song that you’d dance to with your best girl at the prom, if only you’d been invited!!! Then we bounce into the ludicrously titled ‘Cheeto In a Speedo Eating a Burrito’, which I can only imagine is the result of a tour incident that sounds better than it looked. ‘Young Dumb and Into Iron Maiden’ follows suit and I’m grinning like an idiot.

I’m going to try not to go through every song on the record, but another thing that sounds great is when Joe duets with a female singer, in the past he’s done a lot with Lisa Marr. This time out, Kelly Ogden of The Dollyrots provides the harmonies and it sounds great, and there’s half a dozen of those songs on here.

‘White Power Feud In Atlanta’ takes a bit of a darker turn, the band has been resident there for a while now. I’ve been through there a few times on tour, and can attest there are a lot of boneheads in that city, it’s still pretty tongue in cheek though. Joe King is the main songwriter for the band and wrote all but one song on Save The World, the exception being one that he ‘prised’ from long time collaborator Ben Weasel, ‘Bubblegum Girl’. The Dollyrots are present for this one and if you are into this sort of thing you’ll love it, laden with Ramones references.

As with everyone else the band has been on hold for this last year, but I think that’s been a blessing for this record. I always listen to new Queers stuff when it comes out, and sometimes you get the distinct feeling that some of the tracks have been filler – which when you tour as much as these guys is understandable. This one however is 15 great tracks, nothing sounds rushed and it sounds like the band is having fun. It was all recorded at Joe’s studio ‘Scabbey Road’ (see what they did there?). The band recording here is the existing touring line up with Cheeto on bass and Hoglog on drums with second guitar by Ginger (presumably not he of Wildhearts fame).

So to sum up, what you have here is as near to classic 1990s pop punk as you are going to get; it’s strong from start to finish. Are The Queers going to save the world? Probably not, but if we’re all going down anyway it’ll be with a tapping foot and a smile on our faces. 9/10

Preorder now on All Star in the US, and Striped Records in EU. I’m reliably informed that UK fans will be able to pick this up on coloured vinyl from the Brassneck Records distro in a couple of weeks time.