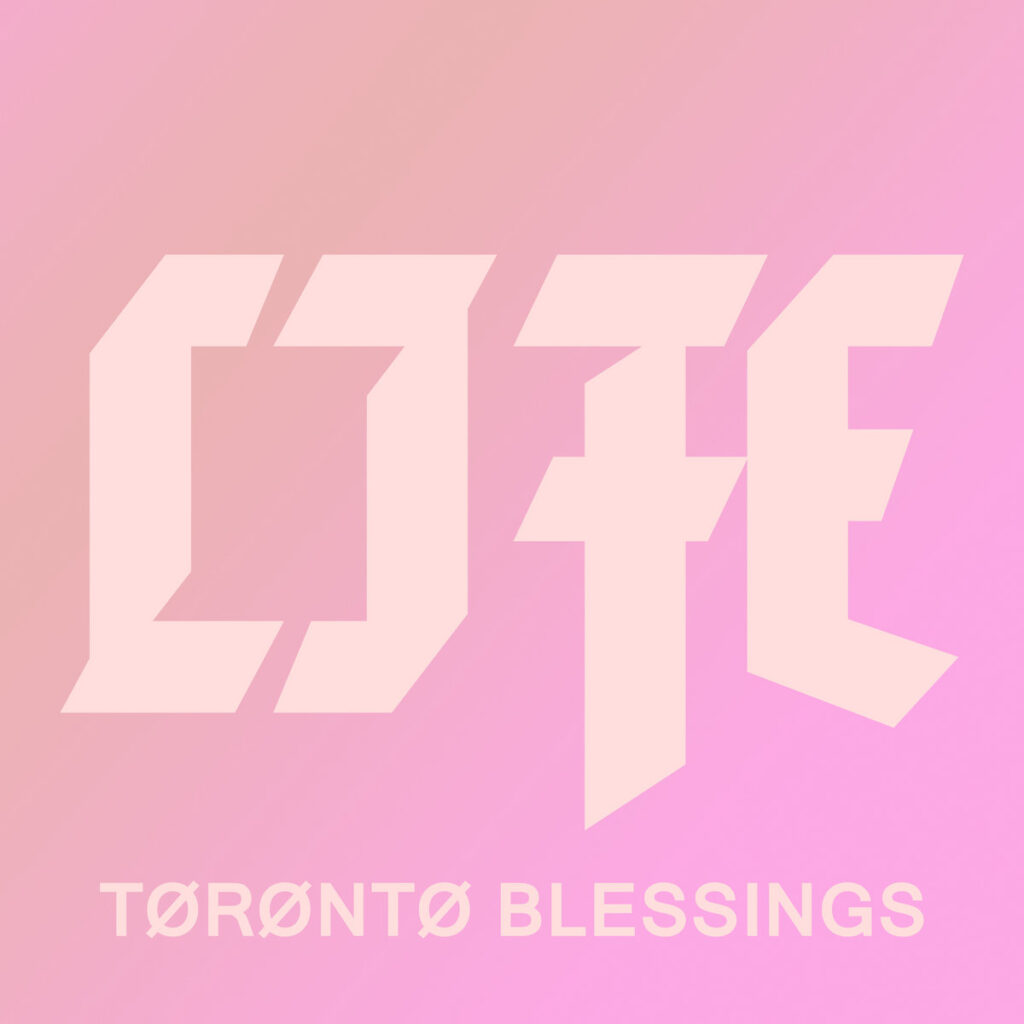 Barnsley’s Toronto Blessings are back, and a most welcome return it is. You may have caught these guys on these pages before. If not you’ll probably need to be doing a bit of back tracking if you’ve not been exposed before here or elsewhere.

The whole post-punk / post-hardcore thing is really tough to do well, and even more difficult to make yourselves stand out from the crowd. Having said that, if you populate your ranks with some seasoned musicians from a variety of backgrounds, the chances are you are going to have a good go at making a decent racket. 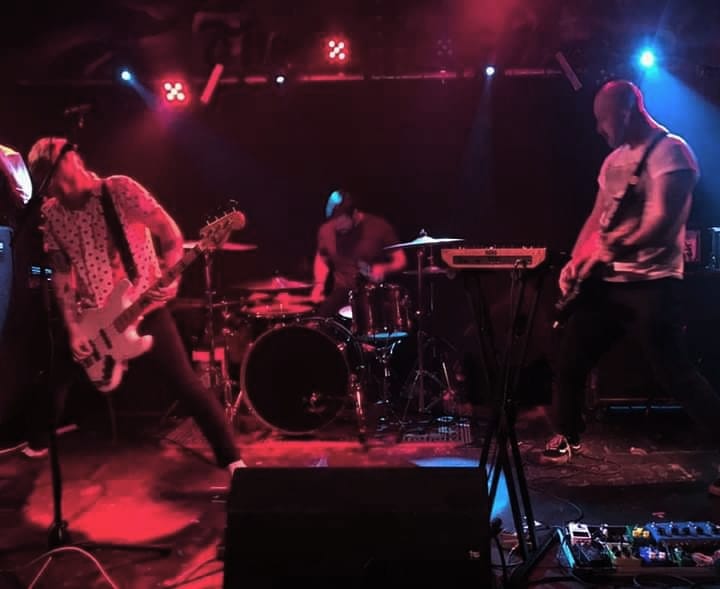 The sounds on offer here come off as somewhere between At The Drive In, Fugazi, Daughters, Drive Like Jehu and the more tolerable sections of the Sonic Youth back catalogue. Song-writing smarts vie with sonic attack here in an entirely captivating manner. I could kind of imagine Refused writing songs like this if Refused weren’t intolerably shit. Tony of Nurgle rating: 9/10

Zero Again – Out of the Crooked Timber of Humanity (Sanctus Propaganda) 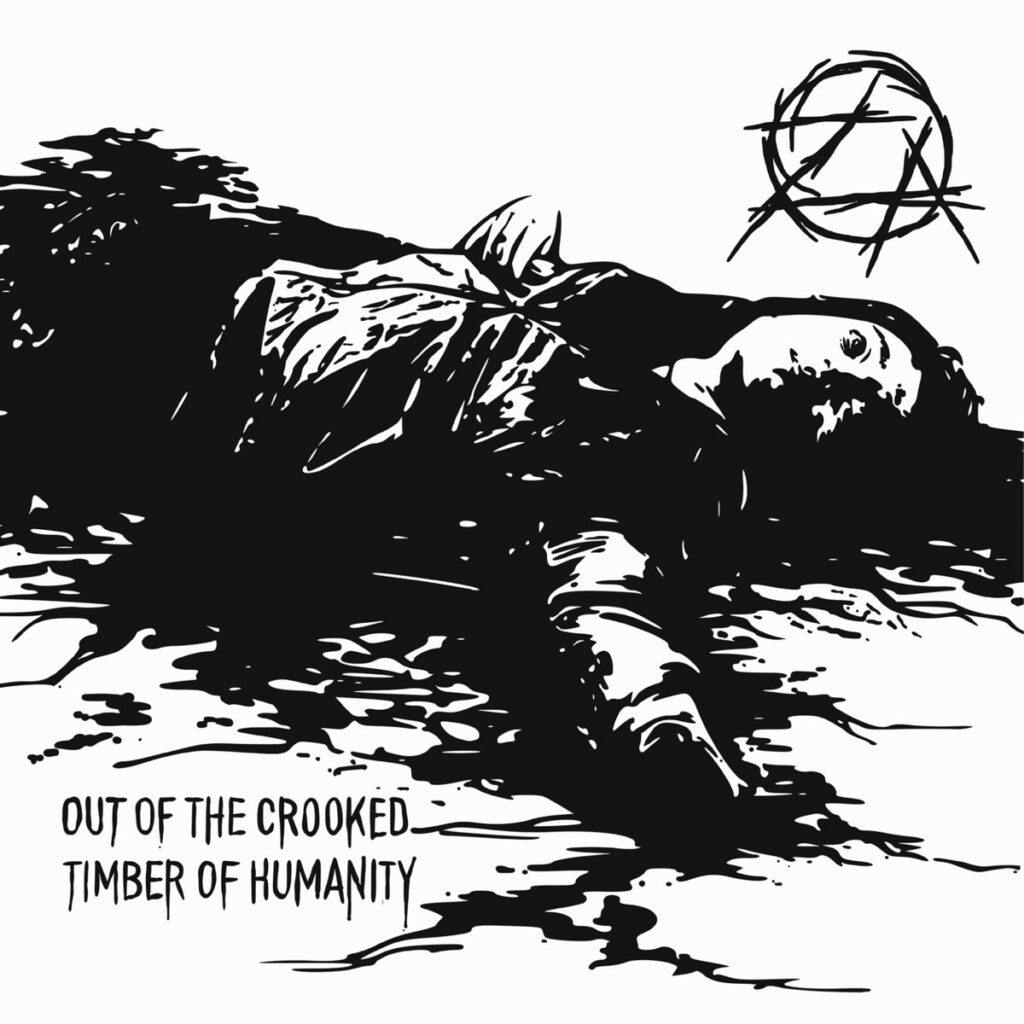 Zero Again appear to have their ranks made up of members of the likes of Warwound, Regret, Bring To Ruin, and Grand Collapse. They are based out of Bristol, and are a new project instigated during ye terrible lockdown yeare 2020. The blurb indicates that they play a unique mixture of fast and not so fast hardcore punk. Out of the Crooked Timber of Humanity is their debut EP.

The first cut, Tragedy Death Pain didn’t grab me that much, and struck me as a bit of a duff blend of Shattered Realm and Nomad by Sepultura without the cool bits. If lumbering metallic hardcore is your bag, you’ll probably think that song is great though.

Moving on, I feel like I’m listening to a totally different band entirely. The tempo is kicked up several notches, and I’m finally given 4 tracks of what I’d been led to expect. This is fucking gnarly, mate. It sounds to my ears like an unholy amalgamation of The Domestics, Earth Crisis and Infest. It’s pissed off as all hell and they come off of the ropes swinging as if their very lives depend on it. It’s stuff like this that I think awakens a particularly 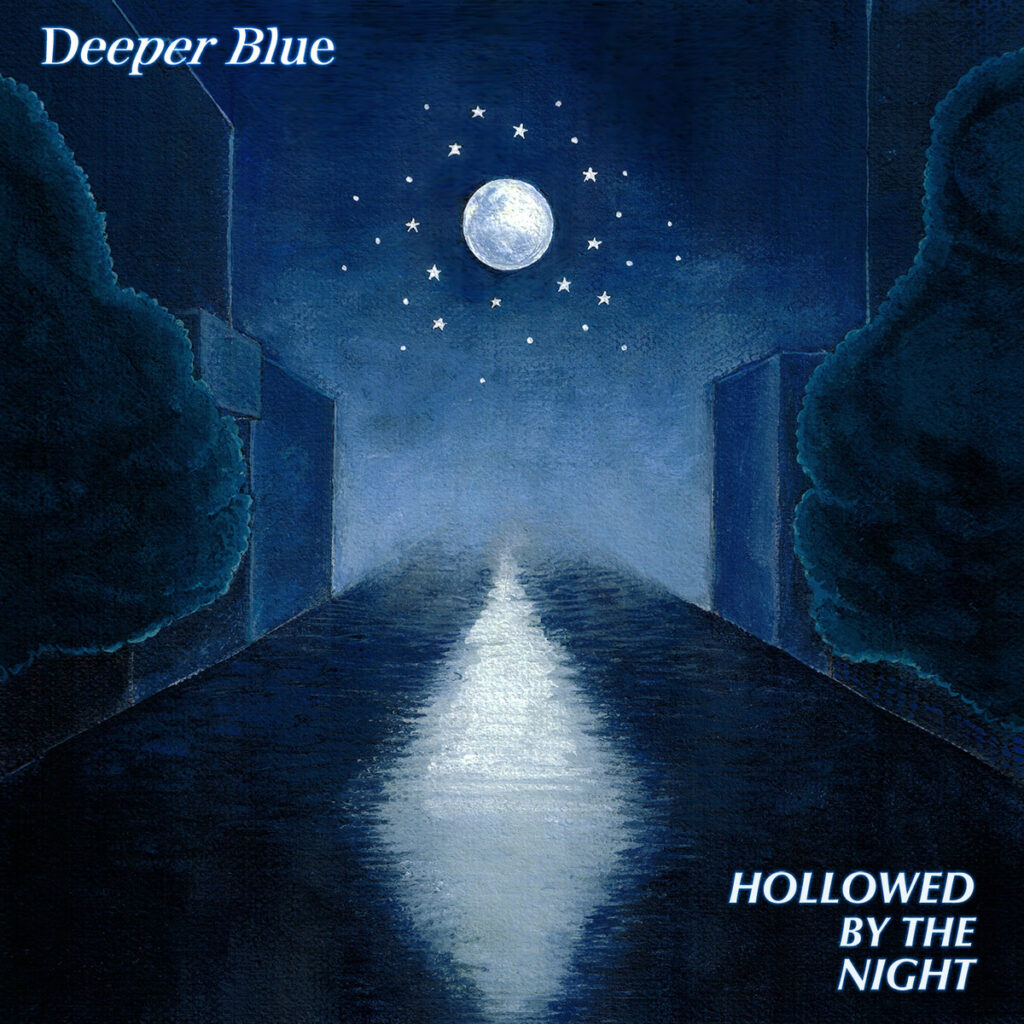 You may recall a review of previous Deeper Blue single last summer. If you don’t I’ll give a brief catch up. This is a three-person project, based in Japan and the US. They self-describe as “Dreamy instrumental surf・punk・noir orchestration”, which in a sense is a fair summation.

As an aside, in my online chats with Michael from Deeper Blue, it transpires that my likening an aspect of their music to Tiger Army has led to them becoming his favourite band. Interestingly, his friend used to play bass for Tiger Army. Small world, eh? I’m not typically an avid fan of instrumental stuff, or of Tiger Army (obvs those guys have vocals) for that matter, but I’ve come to deeply enjoy what these guys are putting out.

The more I think about it, I think I just associate instrumental music with post-rock, and to me one effects and delay-drenched soundscape sounds much the same as any other. What Deeper Blue manage to do is evoke an atmospheric, cinematic sound that conveys I suppose a sweeping sense of rain-drenched drama; it has that kind of “soundtrack” type feel. As they are creating something of an ongoing story with their music, I’d say they are nailing it. If you have more than a passing fancy for stuff such as Agent Orange, The Deltones and maybe a non-heavy version of Envy without the enraged vocals (I realise that is a pretty broad variety of stuff right there) I’d advise taking a swing at this. Tony of Nurgle rating: 9/10 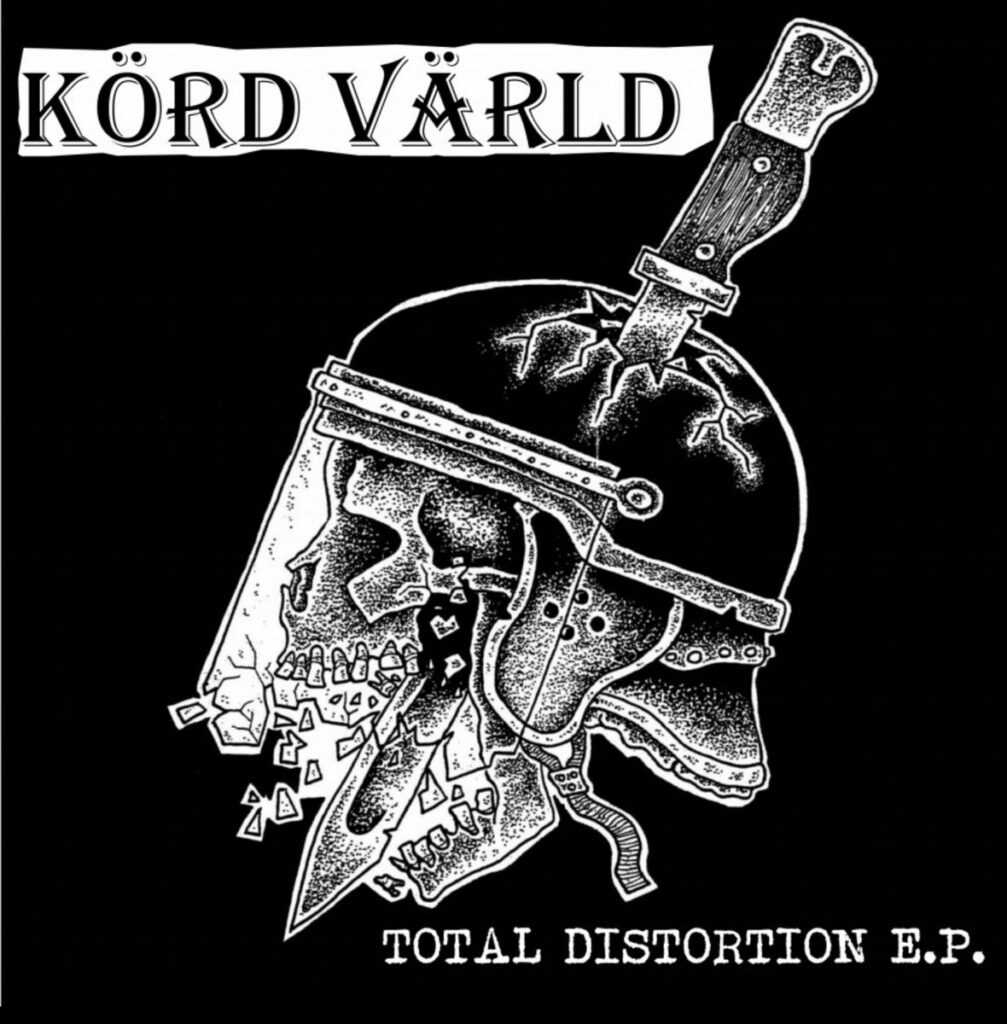 KÖRD VÄRLD are a new band, being birthed unto this squalid planet in 2020. The blurb describes the band as being the bastard offspring of Charlie Claesson (ANTI-CIMEX, PI$$ER, KNIFE FOR AN EYE, THE, BRING THE DRONES, VENGEANCE BY PROXY etc.) and James Domestic (THE DOMESTICS, PI$$ER, CABRO, TOKYO LUNGS, BRING THE DRONES, HAZARD PROFILE etc.). They cite Scandinavian hardcore acts such as Totalitar and US hardcore acts like Poison Idea and Out Cold as being equal influences.

Listening to this in the wake of more Tory mumbling this evening in terms of a “Covid road-map” or whatever, this is exactly the kind of anti-authoritarian breath of fresh air that the doctor would doubtless order were they in with a chance of not being talked over and generally ignored by a government that give no fucks about putting the lumpen proletariat at risk.

Ahem. Anyway, if Minor Threat had been into drinking booze, not cans of pop and listening to Skitsystem (ignoring the impossible timeline, obviously), you can imagine they’d make a scuzzy, aggravated row like this. And it’s fucking class mate. Shout out to whoever drew the cover art for this – a double thumbs up from me. Tony of Nurgle rating: 8.5/10

Total Distortion is released on 26th February (with pre-orders having been live from 14th February). You can pre-order via bandcamp or direct from Kibou Records. 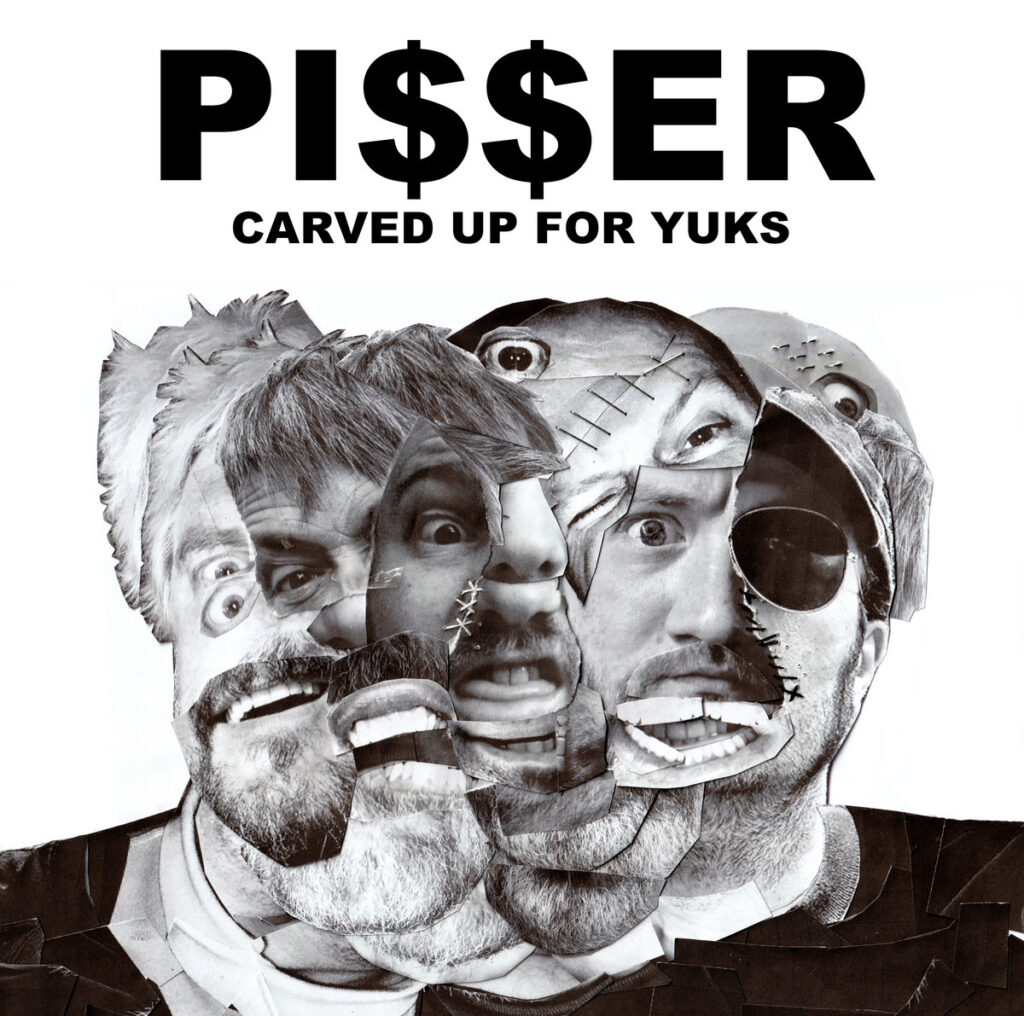 Pi$$er I suppose are something of a “crusty supergroup” if the mind can indeed conceive of such a thing. Anyways, members play in / have played in The Domestics / Dis-Tank / Bring The Drones / Anti-Cimex / Wolfhour / The Partisans / Hobopope & The Goldfish Cathedral / Doom / Dissidents / Revenge Of The Psychotronic Man / The Shitty Limits / The Filaments / Beat The Red Light / Personnel. I dunno, probably others as well.

The last time I reviewed something by , I remember thinking that it would have been fine apart from the irritating saxophone. Reason being it was pretty reasonable crusty sounding hardcore punk until somebody started tootling. I’m warned in the blurb that “this is a pretty unusual record – even for PI$$ER”. That certainly set the alarm bells ringing…

…and apparently for good reason. I’m pretty close to being rendered speechless, if I’m honest, but here goes: I have nothing against individuals that wish to partake of a jazz-fag now and again – it’s not an activity for me – but over do it and you are in serious danger of making either some kind of cult status for yourself (see Sleep’s Jerusalem for example – not a fan personally) or… this. Which sounds like the proverbial monkey had a bash at doing a load of bad dub versions of the same Capdown B-side whilst the proverbial organ-grinder had nipped to the bogs for a lengthy turd.

I’m really not sure who this is supposed to be aimed at. I can’t really imagine anyone enjoying this either sober or baked to fuck for that matter. Don’t get me wrong, I don’t mind being challenged by music, but the only thing I felt I was being challenged to do here was not cuss this, and at that I’ve clearly failed. Tony of Nurgle rating: 1/10.

Carved Up For Yuks is released on 26th February (pre-orders have been live since 14th February). You can pre-order via bandcamp or direct from Kibou Records

Devon Kay and The Solutions – A Little Bit (self-released, 2020) 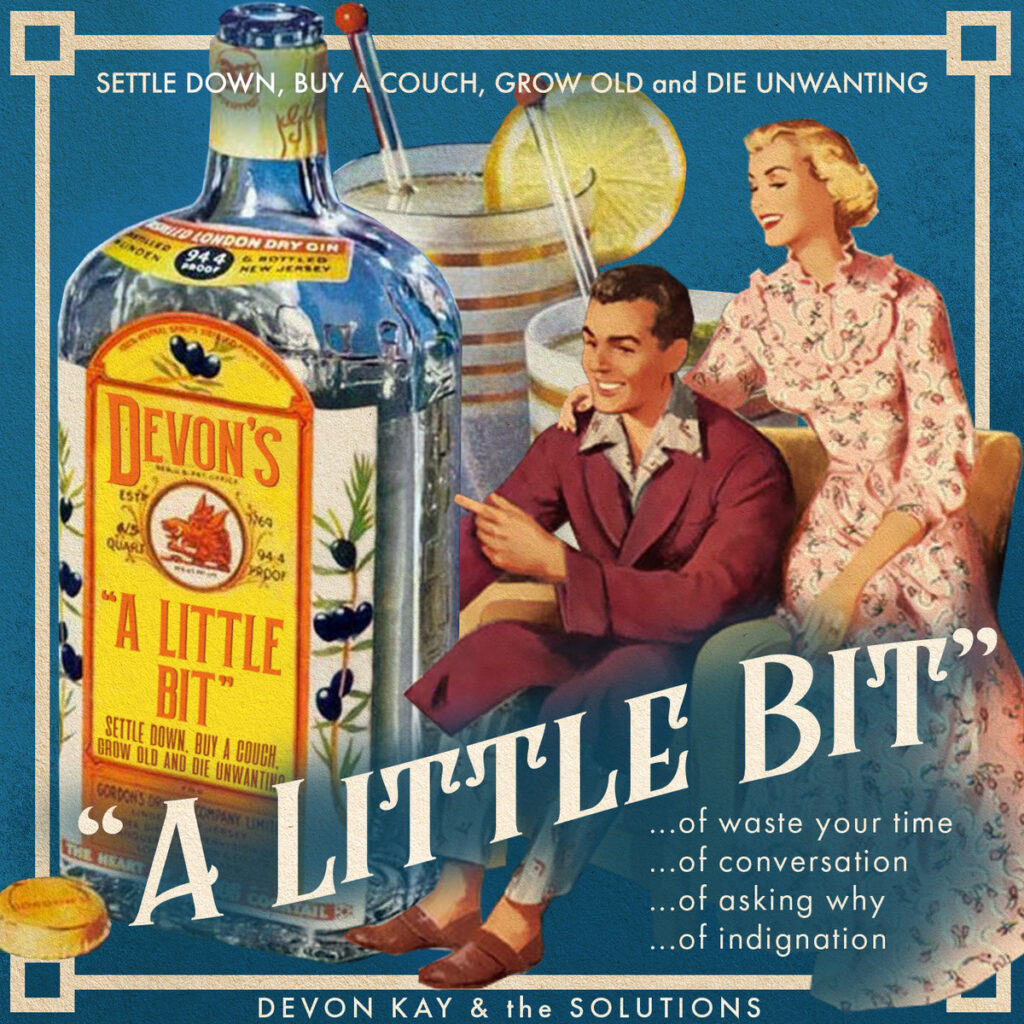 This was out on 11th of December last year. The thing that catches my eye on the write up is a mention of The Hippos; they were on the poppiest end of the late 90’s/early 2000s ska punk movement and I really liked them, so I had hopes for a pop banger.

It doesn’t quite hit that spot unfortunately. There’s elements of Jimmy Eat World in there and echoes of Ben Folds, then we are in the realm of the showtune, none of which I particularly mind truth be known. But… it just feels a bit late in the game. It could have probably featured in an American Pie spin off and done pretty well, but things have moved on.

That brings me to the lyrical content, it’s that whole pop punk unrequited love sort of thing; sounds like he’s pecking this girls head to go out with him and it’s also sounding distinctly like she’s not into it. Here’s the thing, a lot of songs I really love are about that very same thing, bands like Descendents being a prime example. I still love those songs, but they are of their time I think now. And especially in the light of various dodgy goings on with some of the newer pop punk bands, it might be time to ditch the ‘You won’t go out with me and it makes me sad’ schtick. We’ve all been there at some-point or another, but if you genuinely like a person don’t try and make them feel guilty just because they don’t want to play hide the sausage with you.

Anyway, that aside it’s a pleasant enough little pop tune, I’m partial to a bit of that, but it lacks that big pop hook to make it great. Bundie:
6/10