When something from Polyvinyl Records comes up, I pay attention. Their roster of bands may not be the biggest in the world but it is damn fine. Japandroids and Ladyhawke are bands that have excited me for a long time and recently I rushed out to pick up the Julia Jacklin album (which happened to be on pretty, pretty purple vinyl) despite already having received a digital review copy. 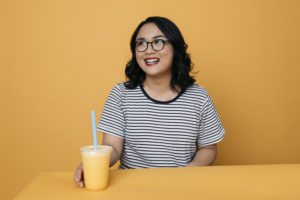 So when the Lord of Nurgle sent Jay Som my way I jumped to. And like the Juila Jacklin album it took me a while – took me quite a few listens actually, but it clicked in the end. See, the last few months have been an embarrassment of musical riches with old favourite bands releasing new albums, my catching up on albums I missed in my 18 month musical sabbatical, and labels sending us frankly high level albums. Truth is, my top ten albums of 2016 list is gonna be a difficult one to compile. So albums do have to fight hard to catch me right now. Lucky for Jay Som (well, arguably – ducks have more musical clout than me) I like to give a fair shake to albums I review (unless I hate them – then they get nowhere and disappear from mind).

So, odd thing to say, but Turn Into(currently streaming here) is a really interesting album, although it took me a while for me to really notice that. My first thought was middle of the road lo-fi indie with a shoegaze vibe. I’m gonna come clean here – I like very little shoegaze. If it is not amazing then I’ll find it dull. I have no middle ground with the genre. There really needs to be something there to grab me or else my interest holds for around 5.975 seconds (pretty specifc, Clara! – T of N). For some reason I missed that spark with this album at first, but it actually does some neat things that I really like.

And these little quirks all come from instruments that Jay Som plays all on her own. Every instrument. I always find myself amazed by that when I struggle to make a single guitar sound acceptable!

Thing is – I am not sure I know what it is that makes this album so interesting. It is all very swirly, with lovely little progressions and an overall washed out sound that just grabs me. That does lead to the situation that it will not be an album I am in the mood for all the time.

It is odd that with all the afore mentioned swirl and washed out sounds, that it actually has a proper chipper vibe across the album. Case in point is the first track Peach Boy, which seems to have de-tuned guitars that just sound amazing. It is weird to have an out of tune guitar break that works so well. I dunno, I can usually find something to compare songs to, but this sound has me a little stumped. Sure, the song overall reminds me of certain Giant Drag tunes. But that guitar. A very chirpy, lovely track that fights with Ghost to be my favourite track on the album. Ghost again has that constantly off key / detuned guitar sound but added to with lots of little bends. It has an almost Pixies like feel overall.

Whereas Next to me is a little more lo-fi but with panning guitars. Somehow it seems to mash the Breeders with Mazzy Star and totally remain listen-able.

Along with Drown, Our red door and Unlimited touch, the shoegaze, postrock vibe is strong in this part of the album. Dreamy and, again washed out, it proves very relaxing to write to. Our Red Door again has lovely little guitar progressions that are fascinating to listen to where as Unlimited touch has a real gentle feel of Slowdive is reflected in the overall sound.

The final section of the album moves back into more lo-fi, indie pop territory. Why I say no and Slow almost have a feel of 80s Cure, with the later adding in a dose of Dinosaur Jr to the mix. And doing so properly. Turn into closes the album and has some sort of weird, nineties package holidays shoegaze feel. Don’t ask me why. I have no idea. And yet – that is the taste I have after listening to it.

So, I listened to this album a lot before giving it a break whilst my life went a little hectic. During that point I just couldn’t listen to it. Yet now that things have settled back to normal, I find myself listening to it and loving it again. It is a very chilled and nostalgic album and as such it works really well. I really look forward to hearing what she puts out next.

Go grab this one now though here.