Ho. Lee. Shit. This record fucking rules. This is pretty much the top and bottom line on all you need to know. Take that as gospel, and get it. Now. Obviously, though, as this is a review, I will go into further detail. Because I’m nice like that.

Now, sadly, this is something of a posthumous release, which was originally slated to come out in early 2016. If you recall, at the tail-end of 2015, the scene lost Dickie Hammond (Leatherface) before his time. This was in fact one of the events that initially triggered me starting the Apathy & Exhaustion blog in the first place. It’s fair to say that his passing affected a lot of people, and his absence was felt both throughout the scene and beyond, even producing heartfelt obituary articles in The Guardian and the New York Times.

This record comprises the final pieces of Dickie’s musical works, which were written and recorded in collaboration with Graeme Philliskirk (also of Leatherface) and Hugo Mudie, Fred Jaques and Julien Blais (all of Montreal, Canada’s The Sainte Catherine’s) – together they formed Medictation, and recorded Warm Places. They all met while Leatherface had been touring The Stormy Petrel, prior to the demise of ‘The Boat’. The quality of this opus speaks for itself, and it really foregrounds the song writing skill and technical playing ability of Hammond, which could often be overshadowed by the imposing presence of Frankie Stubbs. Which I suppose is understandable in that the Leatherface songs are mainly Frankie’s moribund tales of the life and times of a working class alcoholic in Sunderland. I’m unsure how much of a lyric writing credit Dickie gets in terms of Leatherface, however, the Leatherface records on which Hammond played / co-wrote the music for are very clearly a cut above the ones on which he didn’t, so go think about that for a second… 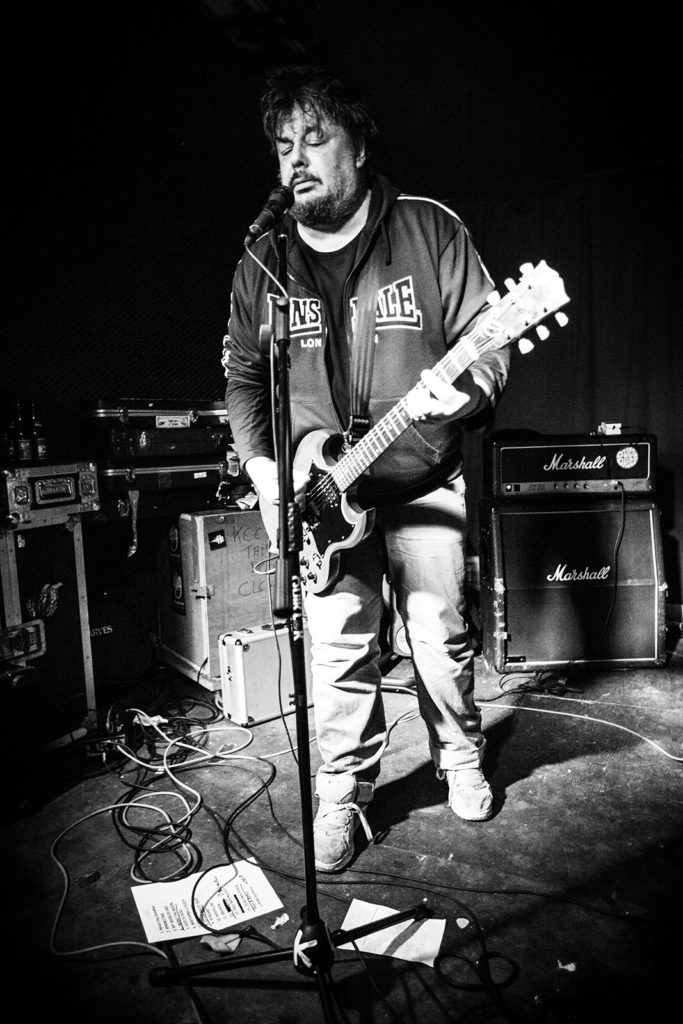 Warm Places was initially scheduled to be released on vinyl through Paper + Plastic (Vinnie from Less Than Jake’s label) in January 2016, but due to Dickie’s untimely demise, compounded by pressing plant delays, it meant that the record was never physically pressed until more recently, and has been brought into production by Dead Broke Rekerds in the US, and by Little Rocket records in the UK / Europe. Just to be able have this to review is a real privilege for me, and I’m happy (and relieved) to say that it doesn’t disappoint. I was totally unaware that this recording had even happened…

I don’t want to do a track by track on this, as I don’t think I could do it full justice, so I think I’ve had settle for tackling it a different way. We’ll see how that pans out, I suppose. Anyway, vocal duties on this came from the Canadian contingent (in the main). I really like the sound of Hugo Mudie’s voice. Without having done any prior reading into this, I could have easily assumed the vocals were done by Dickie. But they are not. He does however take lead vocal on the final chapter of this LP, Stalingrad. 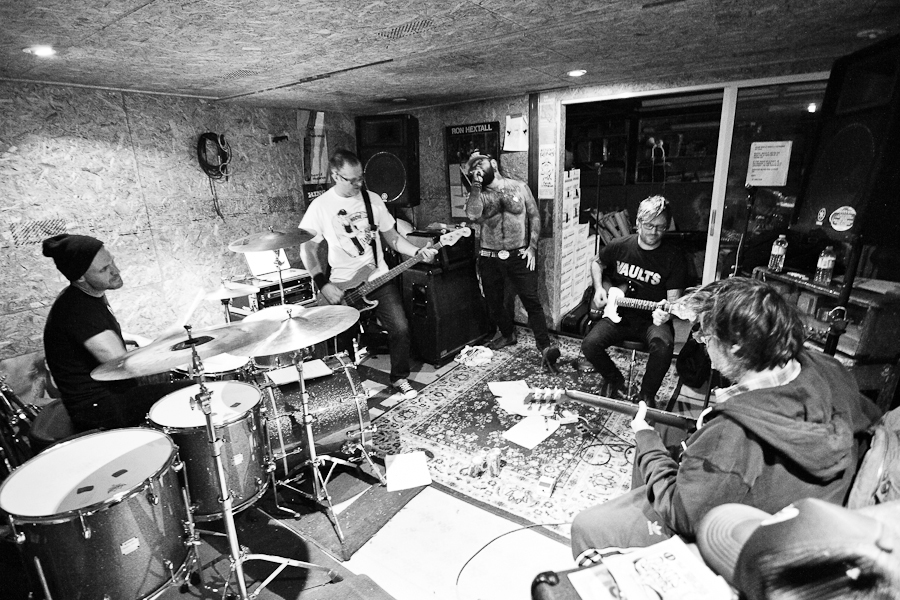 Thematically speaking, this record, Warm Places seems to concentrate quite heavily on morbid and self critical introspection (no wonder I fucking like it). It’s lyrically rich and evocative, I suppose in a similar way to Leatherface. I can understand that Dickie’s lifestyle choices and the impact of the same on his health are forming the core of much of the subject matter here. It’s bleak but beautiful, and at times seasoned by references to having lived in an industrialised port town in the North East of England. Asides from my reference to morbid thematics I feel it would be remiss of me to not mention that sections of this record are transcend and uplifting, particularly My Friends Will Call¸ which is not meant to give this impression. It’s more (as White Trash Rob of Blood for Blood would say) a prayer to the night sky. An attempt at the denial of terminal illness. Spinning the concept of encroaching physical deterioration into a pseudo-conscious choice to not be active or social, or the day to day things that you used to take for granted. The uplifting aspect is in the delivery, which belies the sorrowful subject matter.

Soundwise, this was clearly going to draw heavily on Leatherface. How could it not? However, there’s a good deal more going on here with (again, obviously) a chunk of influence coming from the Sainte Catherine’s (and associated Montreal projects that I’ve never heard of). You can also hear a boat load of other influences coming through, notably Inflammable Material era Stiff Little Fingers, John K. Samson / The Weakerthans, vintage Bad Religion, Lucero, and Bruce Springsteen. Asides from this, there are pointers towards the kind of stuff younger bands such as PUP, Arms Aloft, Dowsing and Spraynard are doing these days, which tends to give something of a more modern spin to more traditional shared influences. At times you could easily be forgiven for thinking these guys were more ‘of’ this era.

Particular special attention should go to the aforementioned, Stalingrad, Dickie’s only lead vocal on the album. He apparently didn’t want to record the vocal and had to be coerced by Philliskirk in order that the other guys in the band would get to hear him do it. As it stands, they kept it. The deeper tone of his voice contrasts well with that of Mudie, and the lyrics seem to be part confessional, part a biopic of sorts, perhaps talking either directly or metaphorically about his family (you can choose your friends, but you can’t choose your family). And perhaps giving voice to the unspoken question of whether or not it’s any wonder things turned out the way that they did, given way your nearest and dearest lived their lives and/or met their ends?

My maw’s got Munchausen’s
My brother’s boxed and gone
My liver’s took a hiding
But I’m standing still
My girl she upped and left me
Said I drank too much
I said “no shit Sherlock,
I think it’s your round”
…then she was gone 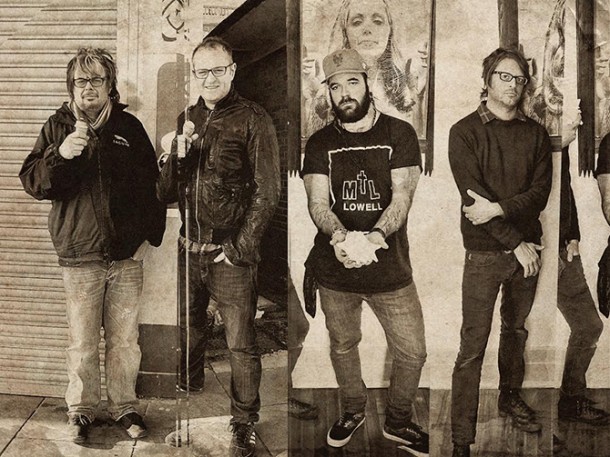 Another theme that emerges throughout the opus is that of seeing through the bullshit of scene politics and loudmouths:

“So drunk, so “punk”, louder than everyone, calling us on our shit when you’re doing none; you’re just a little moron from the last rainfall” (The Last Rainfall)

“No Gods, No Masters; you dream while you’re praying all day to get out of work, your own disguise, your shitty life, and the truth of it.” (Gods and Glory).

These are concepts we are all doubtless familiar with. Chances are if you aren’t, then perhaps you are the type of person these songs are calling out? I dunno. You tell me. The truth’s hard to swallow. People like you are the major factor in my own self-imposed separation from going to gigs or shows or whatever you want to call ‘em. Your self-admiration and egotism makes me want to throw up on your fucking faces, mate. But fuck you all, I’ll rise above.

I get the feeling that this record could well be one of those gifts that keep on giving. It’s a very relatable, very ‘real’ feeling record. This lot have made a record to be really proud of. It’s not only emotionally deep and incredibly well crafted, it also serves as a fitting swansong for a true hero of British punk rock. 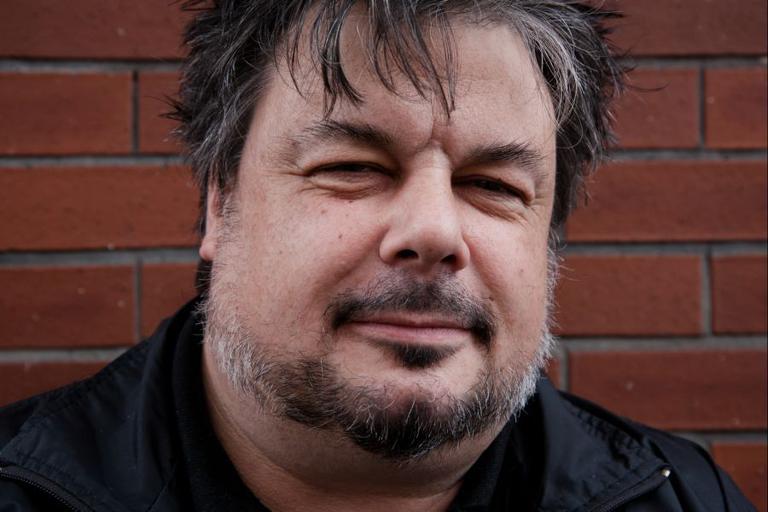 Stream this magnificent piece of punk rock history on bandcamp
Buy it from Dead Broke on orange vinyl here or on violet vinyl here.