Forever is the latest creation by Pittsburgh hardcore outfit Code Orange, newly signed to Roadrunner Records. It is straight from the deepest, darkest pits of hell, and is one of the most exciting and important albums you will listen to in 2017. 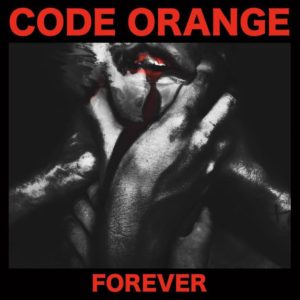 The title track, ‘Forever’, begins forebodingly with what sounds like satanic incantations before a furious, trudging riff thunders into existence. It is staggering, like a malevolent juggernaut crunching its way through existence. Rather than being mindless however, an aggressive dynamism runs through its structure, with complex riffs pinned together intelligently despite the apparent chaos.

‘Kill The Creator’ detonates at the start – this is seriously the heaviest music in recent memory. These guys cut their teeth under the tutelage of Converge at Deathwish Records and although still in their early twenties are giving their mentors a run for their money. And that is not written lightly. One riff smashes you in the face and then gives birth to another. It’s like the soundtrack to a star exploding – utterly chaotic, cataclysmic and beautiful. 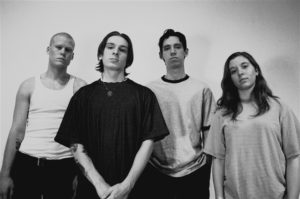 I’m not going to do a track by track but it’s going to be really hard not to because every single one is rock solid gold. ‘Real’ sounds like someone built the Massive Fuck-Off Riff Machine, turned it up to 11 and left it running. It breaks down into an industrial sound with beats looping through it. The bass sounds unreal, not just in this song but throughout. It has to be heard to be believed. This song also features the lyrics “This is real now, motherfucker” before another breakdown kicks your arse again.

‘Bleeding In The Burr’ is a complete departure. Spiky and sinister it uses the cleaner vocals of Reba Meyers and feels like a post-hardcore song’s evil daughter. You can’t help feeling like this song is watching you, and also that this is just a temporary, terrifying respite before things get angry again. By the way, the whole band sing/grunt/roar/howl except bassist Joe Goldman who is too busy shaking the foundations of reality. 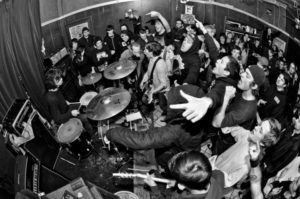 ‘Mud’ sure enough delivers more madness. There’s a real Deftones influence shining through on this track with the guitars sounding deliciously savage and massive like Stephen Carpenter’s finest creations. The breakdown is constructed like a mathematical formula but at the same time is utterly primal and untamed. There’s a pick-slide in it which sounds like a passing fighter jet.

‘The New Reality’ is like a nightmare coming alive in your ears. Riffs are kaleidoscopic and are so original that they feel alien like you’re listening to heavy music for the first time. ‘Spy’ is distilled evil, and ‘Ugly’ recalls Nine Inch Nails in a very capable and convincing way with its industrial metal vibe. I know I described Code Orange as hardcore before – they are. They’re everything really. 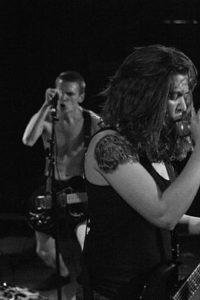 I know I said I wouldn’t do track by track but we’re here now. ‘No One Is Untouchable’ is probably my favourite. It pulverizes your senses with apocalyptic drop-D destruction. It’s devastating and it’s divine. ‘Hurt Goes On’ is much more spaced out, bringing the drum machine back and more of the Trent Reznor vibe before the whole thing explodes against an onrushing wall of sound which reminds me of Alec Empire.

It tells you everything you need to know that I don’t even like the last song ‘dream2’ and I’m giving this 10. I’d give it 11. Right now I want to say it’s hardcore’s White Pony. Maybe that’s me getting caught up in the moment – but either way has to be heard now, immediately.