Tony: This one (Victory Lap) surely has been a long time coming, and it was clear that more than one of our merry band of opinionated chums would want to take a run at it. Alex (who realistically deserves the main writing credit here) and I have both been giving this a great deal of air time over the past couple of weeks. Read on to find out what we both thought…

Alex: Propagandhi used to be the nearest damn thing to a sure thing. After the much-heralded masterpiece that was Today’s Empires, Tomorrow’s Ashes followed the hugely respected Less Talk, More Rock, the next release was always going to be tricky. They managed to produce another incredible record in Potemkin City Limits and then in 2009 came Supporting Caste, which although not recognized in the same light as Today’s Empires… is still arguably their finest album.

Failed States came in 2012 and finally the bar dropped a little. Look, it had to happen sometime. No band ever has been consistently brilliant without the odd blip, and often the great ones are defined by how they pick themselves up again. So, does Victory Lap represent the re-mounting of the proverbial horse? Well, the answer is… just about, but without managing to get the feet in the stirrups and struggling to point said horse in the right direction.

Tony: I think at this point, I ought to point out that I’m much more in favour of the first three Propagandhi albums than I am of their more recent work. I think I just feel more in tune with their earlier, snottier punk sound. But having come through high school during a period when thrash metal was still (just about) one of the ‘genres du jour’ (I dunno, I can barely speak French, mate), I do also feel a pretty strong affinity to everything from Supporting Caste onward. I can barely tolerate Potemkin City Limits. I think it’s terrible, and though I understand it’s something of a transition album (i.e. from hardcore punk to crossover thrash), it sounds to my little ears a bit laboured, and as if the mighty Propagandhi weren’t really sure what they were up to at the time. There seemed to be a great deal of technical twiddlery to no real purpose. I just wanted unfettered fury and acerbic comments. I tried so hard to like it, and just came up empty time and time again. Fuck that album. I spend most of my time ignoring it’s very existence. An opinion which I’m sure will just raise my level of general unpopularity to a new high. Who needs street cred?

Victory Lap, well, I have to say I really enjoyed it. Propagandhi described it as a total rager of a record, and it pretty much is. I’ve been jocking the fuck out of this record to anybody that will listen.

Alex: First track ‘Victory Lap’ begins with the kind of huge riff complemented by dazzling fret work one has come to expect from Propagandhi, and it’s enough to send excitement levels rocketing as it builds into an absolute romper stomper of a verse. Things immediately sound more akin to the glory days than the thrashperimental feel of the last offering. 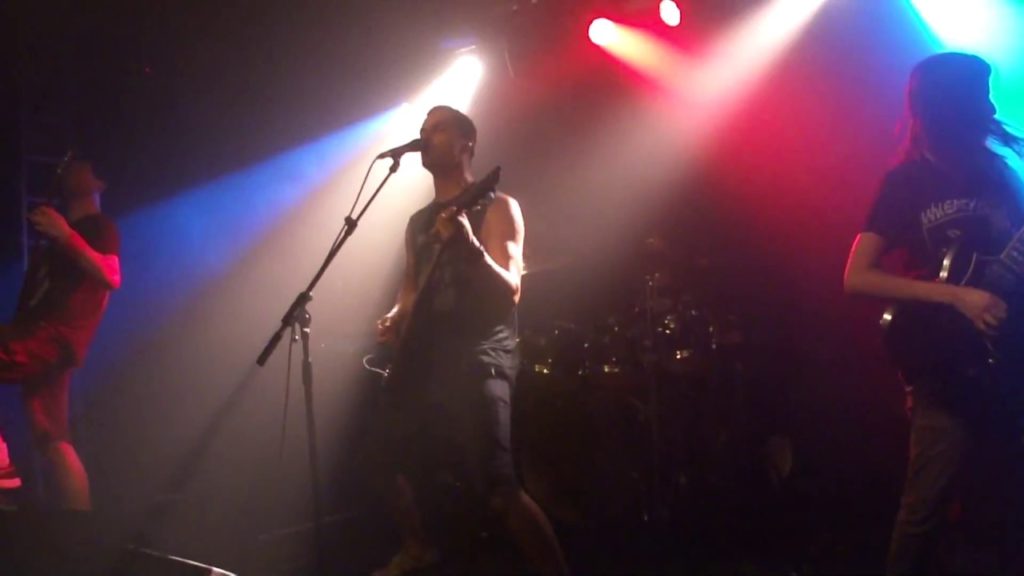 Alex: ‘Comply/Resist’ evolves from spoken word into a blistering melodic explosion of political dynamite with a guitar part that sounds exactly like a fucking gattling gun. It’s at this point that you remember that Propagandhi are the ultimate protest band, because of their ability to put into words and music so eloquently and aggressively what others can only manage in a far more clumsy, poorly executed manner.

Tony: I pretty much dodged the opportunity to interview them the other week when they were touring because I’m not intelligent or politically savvy enough to ask them anything interesting. I exist in a fantasy world most of the time because reality is far too depressing. However, you can rely on these guys to time and time again explain in a witty, accessible and most importantly intelligent manner what their beef is, and why it’s so important to beef about it in the first place.

Alex: ‘Cop Just Out Of Frame’ continues the stampede with major key big and crunching triumphant chords which somehow make the spitting fury of the actual lyrics sound all the more acerbic and cutting. This flows into the haunting ‘When All Your Fears Collide’ sung by bassist Todd, who makes your soul wither as he cries out “you feel yourself corroding on the inside!”

Tony: I found myself falling hopelessly in love with the finely tuned rage and dynamic violence of most of these tracks (and the album in general), and the bitterly sincere lyrics. I feel at this point that mad props need to be given to new guitarist Sulynn Hago. She can shred and slay with the best of ’em. What a fantastic addition to the band. When I saw Propagandhi play in London t’other week, I couldn’t stop watching her fingers chewing up that fret board. Incredible. She rocked it hard and made it look easy. I should probably add at this point that if either of the drunken fucking melts that were stood by me shouting out sexist remarks such as “take your shirt off” are reading this, fuck you again, you pair of utter dweebs. In case you think that it wasn’t you, one of you chinless wonders was wearing a yellow handmade Frail t-shirt. Anyway, stray comments, asides, ‘When All Your Fears Collide’ is probably my least favoured track on the album, though. There we go. A polarization of opinion. 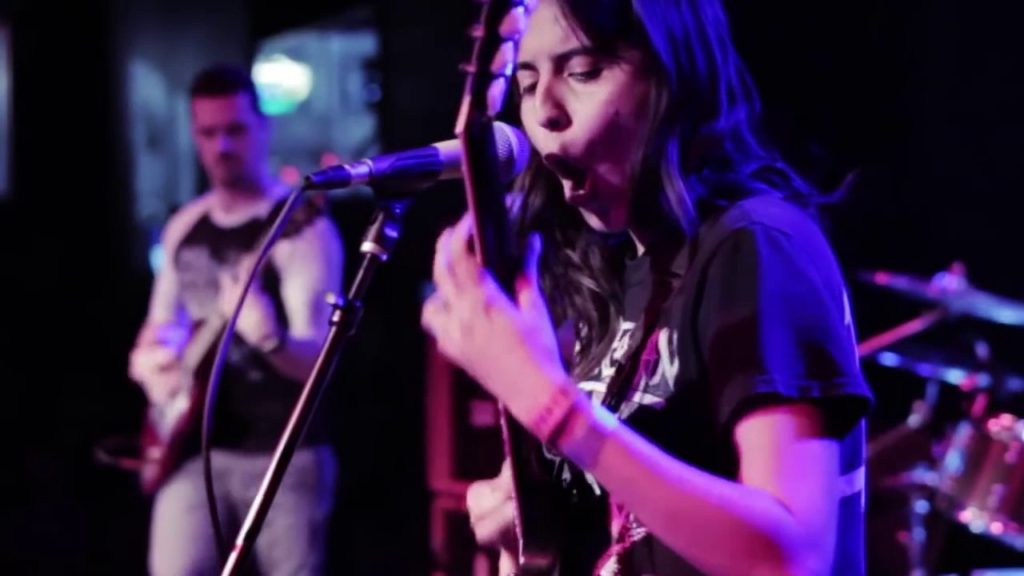 Alex: Uggh. It sounds good. I want to love it, but something just isn’t there. Thinking back on the best Propagandhi albums they always did have tracks that seemed like filler in isolation, but you didn’t care because in context they seem to act as backdrop to those massive songs which absolutely bowled you over. I guess this is an approach which works if you have massive songs. This album has good ones but… well let’s keep listening? The masterpiece isn’t there. The brushstrokes are vivid and bold and intelligently placed, but the painting isn’t grabbing hold of your heart and squeezing until it bursts. The songs each have a very specific theme; for example ‘Letters to a Young Anus’ where Chris addresses his rebellious past self with words of advice, and ‘Lower Order’ attacking the vile mistreatment and brutalism of the meat industry. But it all feels stuck together rather than a flowing, unified piece of work.

A few tracks, like ‘Failed Imagineer’ sounds like half a song, unfinished and loose-ended, whilst others fall prey of one of Propagandhi’s weaknesses, being too clever to the point where they feel impenetrable. Thankfully, the closing number ‘Adventures in Zoochosis’ is a beautiful one, where Chris accepts his generation are done for but encourages the young to stand up and fight back. It’s almost as gorgeous as the tear-jerking ‘Iteration’ at the end of Potemkin City Limits.

Tony: For my money, I quite enjoyed ‘Failed Imagineer’. I think it’s got something valuable to say about the sins of the past perpetrated in the name of ‘progress’. It’s at this point where I suppose I’ll be exposing myself as a despicable human being here by admitting to not being a vegan. I’m one of those contrary fuckers that loves animals, though. ‘Lower Order’ made me feel incredibly guilty and ashamed of myself for my eating habits. Every time I hear it, I feel like I should seriously reconsider my stance on what I conveyor belt into my face. I really do find that track harrowing, and there’s some definite truths there that people ignore because it’s convenient to do so. Similarly, ‘Adventures in Zoochosis’ I thought was an incredibly evocative potrayal from the point of view of animals being kept in captivity for the amusement of humans. Heart wrenching stuff. When my kid is old enough to go to the zoo, I feel right now that I might not be able to take him.

I should give a shout-out to that crusty, almost grinding bit in ‘Nigredo’ that sounds like Combatwoundedveteran. Kind of unexpected but most welcome. You forget sometimes that Chris Hannah used to play in a grindcore band (Eat Shit). Having said this, I’m not massively feeling ‘Nigredo’ overall, though.

Alex: This is a new Propagandhi album, and it lives up to that, which is praise enough on its own. This isn’t going to change your world though, which is probably what you wanted and needed. More than a Phelan Rating: 7/10.

Tony: Fuck, man. I can’t wholeheartedly agree with you on some of the things you’ve said, but I can agree it’s not their best record. However, I’m not getting the same impression of disjointedness that you did. I guess Potemkin… made me feel a similar way to you (but worse) when that one dropped. I think by and large, this record is angry, and delivers fury in a concise and economical way. It doesn’t lose its way in technical tomfoolery, and no points are dropped in terms of passion and commitment. The riffs and the rhythm are still there in spades. Those feeling the wrath of Propagandhi this time out include (but are not limited to): People with an ‘I’m not racist, but…’ standpoint; self-admitted racists; cops (pohleez broodaladee, brah); the alt right; Donald Trump; pro-military; the meat industry; privileged male society and so on. Pretty much what you’d expect, really. Fuck “the man”, yo. If you disagree, you are basically a cop, mate.

This record well and truly stokes my internal fires. My fist raises, my finger points, and I shout along to it. It’s class, overall. I do feel like there is the odd the turkey of a song thrown in there, though… the aforementioned ‘When All Your Fears Collide’ and Nigredo for example. Best tracks for me are Victory Lap and rampaging galloper Tartuffle. Like yer man says in In Flagrante Delicto. “Don’t be so hard on yourself, you’re just like everybody else”. Tony of Nurgle verdict: 8.5/10

Usually I try and include a legal stream for you kids to check out, but it seems it ain’t up there anywhere as yet. Soz.