One day, Laila K and Barney Boom were sitting around the boompad having a heated discussion:
“Most of the time, I like our innovative directions,” said Laila. “But, being a perpetual reinvention machine is a lot of pressure. The franchise we took our name from has been re-hashing itself essentially nonstop for a quarter-century, for fuck’s sake!”

“Perhaps we need to go back to basics somehow,” considered Barney. “I’m wary of doing an EP though. We put out so many EPs back in the day that I can’t even name all the bastards. That’s fine in the beginning. Those teasing little lunch appetisers of things to come. But we’ve spent the past decade basking in the warm, evening meal satisfaction of the studio album. You don’t go back to lunch!”

Laila composed herself. “Well, we need some way to fund a trip on the Warped Tour so we can knock American skulls together. A quick EP might be just the reflective exercise we need anyway. What if we did it in a style suited to the format, like a string of hardcore punk bangers?” 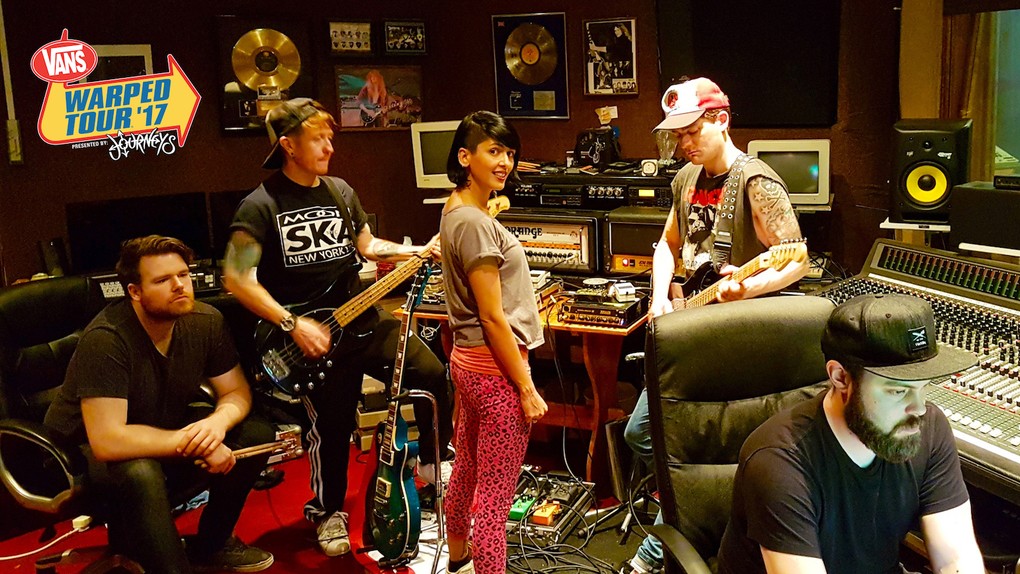 “I’ve been asking you for years to stop saying that, man.”

What exactly did Laila mean by “hardcore punk bangers”? Those were the words she used onstage when the band actually reached the Warped Tour, and they rang in my uninformed ears until I got the disc home. Were they finally going to usher in an age of concordant punk and nu-grime, as predicted in The Carbon Diaries series? The RATM-style recurring tagline, “Big up all UK punk and free party people,” was present on the sleeve, but being recurring, wasn’t as reliable a clue as it at first appeared. While it’s fair to say that Sonic Boom Six have certainly been responsible for an underground push in the urban-dance splicing direction over the years, it seems that my Anglo-Americanised brain got more mashed up in interpretation than the songs on this record. On Cardiac Address the band look back to their rock inspirations from the 80s, 90s, and their peers of the early 2000s. 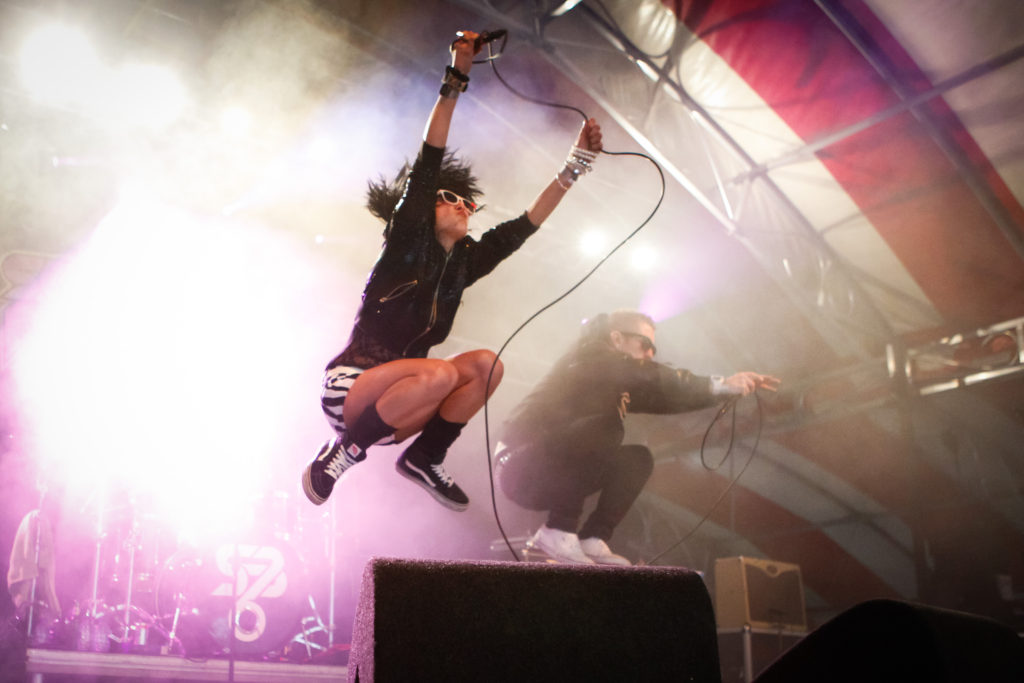 Recorded in Blackpool, the 8-track EP features some of the various sounds of a Rebellion Festival. Whether skate, street, ska or hardcore, each sub-genre comes in small and fast compartments of thunderous quality (total runtime: 20 mins), that as the title and cover artwork suggest are from the heart with no fuss. Minimal-winner “When You’re A World Away” starts with hardcore menace and remains Minor Threat-powered throughout its 75 seconds, blasting those that make dumbarse claims about refugees and the homeless in short order and giving them no time to respond. “My Philosophy” is a quick and catchy counterpoint to The Specials’ “Too Much Too Young,” musing about the possibilities of life paths not taken. And “The Kids We Used To Be” is a snippet of motoring, melancholy majesty that could have come from Nitro Records. 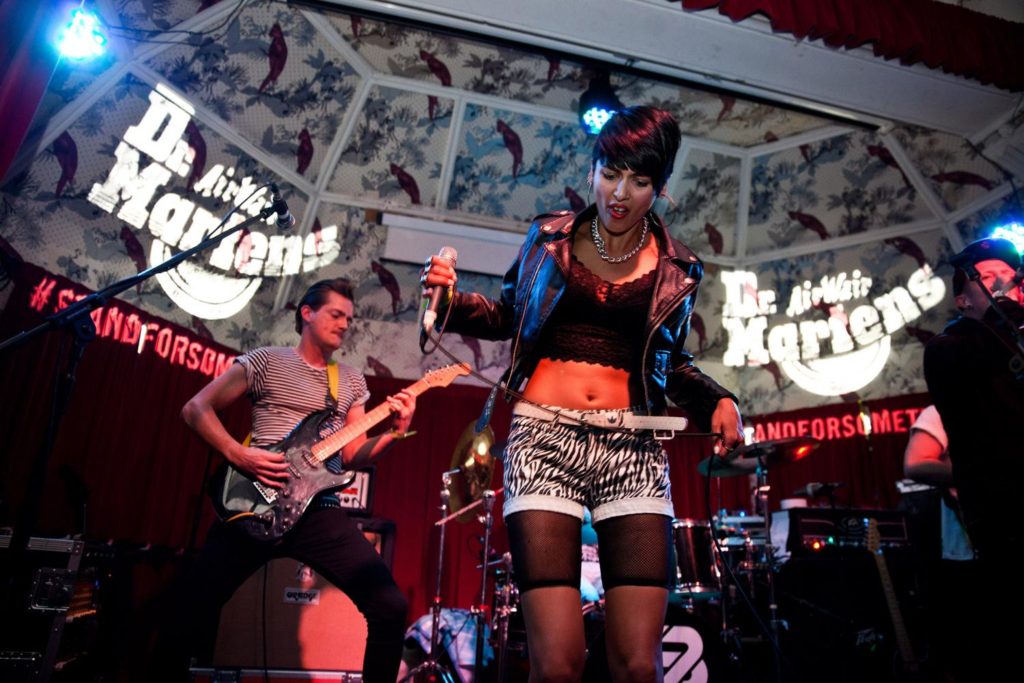 The aesthetic may be classic, but the lyrical perspective is of our times. Already described are efforts to combine ageing punk-person themes with the bands’ updated anti-daft-racist message, for those of us living through the era of the May-Trump Axis of Isolation. I am extremely skeptical of the idea that shit presidents lead to good music, but there are some choice efforts here. The throbbing chorus for the slightly comical “Real Bad Dream,” for example, compares the orange bollock to Biff Tannen. I do wonder if Barney Boom should be throwing around accusations of time travel though, considering that I recently learned via an old Peel recording of his stint as guitar player for early 80s funk-dance band JuJu (albeit under the spelling Barns).

Opener “Western Society” follows the trick of “Baby, I’m an Anarchist!” (Against Me!), by putting political relationships in a romantic framing. The protagonist not only dismisses the tempting analysis of the web-wide-white-right, but — to my interpretation — exposes the mythos of such societies where historic underpinnings lead them to continually flirt and identify with supremacist concepts. This musically is probably one of my least favourite ones on Cardiac Address, along with the occasionally meandering “Learn to Live With It,”, but they’re still good songs with pacy elements and admirable messages. The last original is “Building a Wall,” a bitter fuck of a track where the Boom borrow a bit of lingo from Refused à la their early “The Rape of Punk to Come.”

Finally, we come to an exception to the thundering: a relaxed, dub cover of “Positivity” by Capdown. For an act who have always layered homages exponentially, this is an obvious way to end this reference record, working legible lyrics out of this monster guitar track. With the elegance of their own “Northern Skies” version comes an interpretation that is two minutes longer than the original, but just as complex and invigorating, inviting us to slow down, take a moment in this world of shit and consider this advice. (This works similarly on their acoustic rendition of “The Kids We Used To Be.”) Seasoned thinking complements youthful energy, even if the youthful part’s long since been covered over with the hard skin of graft and cynicism.

Any artist who hopes to meaningfully stir the conversation pot in a way that leads to it being less of a turd stew needs to occasionally step back and take stock of where they’ve come from, to see where they might go next. On this seemingly small release, Sonic Boom Six do so, and the results are extremely satisfying. So far as I can tell from my considerable distance, (the only name I recognise in the printed pre-order thank you list is Rookie of Punkermentality fame), they remain Mancunian heavyweight apparel of the UK punk scene. So let’s put on our classics and have a little dance, shall we?

The band are doing a UK tour for Cardiac Address in November. Go so you can make me jealous: http://sonicboomsix.tumblr.com/post/165396866182/uk-boomers-you-didnt-think-we-could-forget-about