The Pearl Harts are a two-piece, female rock outfit from London. I love the album title, Glitter & Spit. Pretty much summed up my getting ready for a night out before I discovered the use of aloe to affix glitter to my face. Gross, but there ya go. So, obviously, on this basis I was pretty excited to give this album a whirl.

Full disclosure upfront – I haven’t stopped listening to it since.

There isn’t a lot of information available about The Pearl Harts, but this is their debut album, having released a few things DIY. Still, they have toured with Garbage and Skunk Anansie whilst still independent, which is pretty impressive.

Having a read around what is out there is comparisons to a whole raft of bands. I’m not sure that I agree with them though, so I won’t go through them. There is a comparison to Brody Dalle (The Distillers), and I agree that the singing on the album does reach the same guttural intensity that Brody is known for. However, if I wanted to pin this band down I would plonk them somewhere between The Kills and Dead Weather – two bands featuring Alison Mosshart. And I did notice the similar spelling of the band’s name and Alison’s surname. Coincidence? No idea, but I think that comparing to Mosshart’s bands is both fair and a badge of honour. After all, in my opinion, both The Kills and Dead Weather are flipping awesome.

Opener Black Blood sets the pace for the album. Heavily beat driven; rhythmic drums topped by short, snappy guitar riffs. Minimalist with a big sound – exactly what I want from a rock two-piece. This continues with Go Hard and many later songs. Each song has a strong rock sound with dark overtones, yet none blend into the other. They are all distinct. These songs have the sort of beats that are hard to avoid gently nodding my head back and forth to. Even in public spaces. Bah, I’m not gonna be embarrassed by that.

The Rush, Bonfires and Hurt are more flowingly melodic, easily carried by the vocal of both singers. I am not nuanced enough to distinguish the vocals, nor know how the vocal duties are split. But both singers have great, strong vocals that stand up to my earlier comparisons to Brody Dalle and Alison Mosshart. The Rush has the sort of build and crash of instruments thrashing out a melody that I am prone to love (and consequently wish would continue a little longer, but… that is not The Pearl Harts. 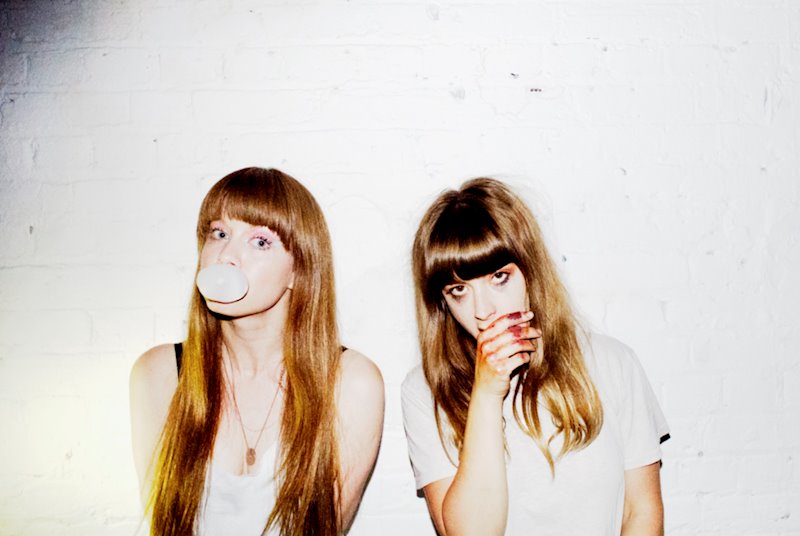 Lara still has that sharp, rhythmic beat but with a lot more of a cheeky sound. There is something here that reminds me of the Scissor Sisters but, probably far more relevant, is the echo of The Ting Tings. It is a fun song that I can definitely slip into a DJ set for various crowds. Living’s Done and the wicked Hit the Bottle turn the tone harder, with a punk driven vibe that feels just as accomplished as any other track on this album. Lost in Time is altogether different – an indie track that took me by surprise on this album. Yet still, it does not sound out of place and it is still an enjoyable piece of this album. I’m interested in hearing more Pearl Harts songs that are of this dreamier, ‘build up’ type, though I am not as sure I would grab an album that was purely made up of them.

The Pearl Harts have been around a few years. Skeletons Made of Diamonds seems to have appeared at least four years ago (2014) – yet subsequent versions of the song show that it has evolved somewhat, whilst the essence remains the same. This can be a blessing and a curse, I guess. The band have had time to polish and refine their songs, leading to a fantastic finished product. One that I plan to grab on vinyl from www.thepearlharts.com/shop/ when I have the spare cash.

However, should the band do well, which I hope does happen, I wonder how they will fare having to push out an album in a much shorter time scale. But this may be worry over nothing. It is clear the band have both talent and breadth: sure the album has a particular ‘vibe’, but songs do cross into different styles – and do so with ease.

In all, The Pearl Harts sit up there with all I want from my favourite two-piece bands such as Black Box Revelation and the legendary White Stripes. I look forward to seeing them live, and hope the energy and moody vibe transfer to the live stage.

All in all though, an exciting new find for my ears. One I thoroughly recommend.