Habitually I don’t re-run reviews. However, we have some special circumstances right here.
After some unfortunate legal circumstances with the label that was supposed to be releasing this album, culminating in no physical release, Ramallah’s new joint The Last Gasp of Street Rock n’ Roll is finally seeing the light of day through State Line Records in the US and Randale in Europe.

Yep, it’s about fucking time, brothers and sisters. White Trash Rob and Ramallah have rolled deep with this one – and somewhat stealthily; this release has been so fucking low key I’m still not sure if I’ve been dreaming for these last 5 or 6 weeks. About the only thing convincing me it’s actually not a dream (besides the internet evidence of course) is the screeching fucking hurricane of existential misery that’s been buffeting my stamina and resolve.

Everybody of course knows of Blood for Blood (1994 – 2012), a band that has courted controversy over the years for many reasons; violent shows, alleged association in the eyes of the powers that be with street gangs, Rob’s well documented battles with his personal demons (depression, alcoholism, opiate addiction and so on and so forth), and of course the situation surrounding the sacking of co-vocalist, Buddha, following serious allegations of raping a minor.

Controversy aside, Blood for Blood remain one of the hardest hitting and viscerally real bands from the global hardcore scene throughout the duration of their existence, although for me only really beginning to hit their true stride with the release of 1999’s Livin’ in Exile (Victory Records) and Outlaw Anthems (2002, Victory Records). Let’s suffice to say those ones still get played ALL THE TIME at Nurgle Towers (for the benefit of American readers, my house doesn’t actually have towers, and all English people don’t live in fucking castles, mate). 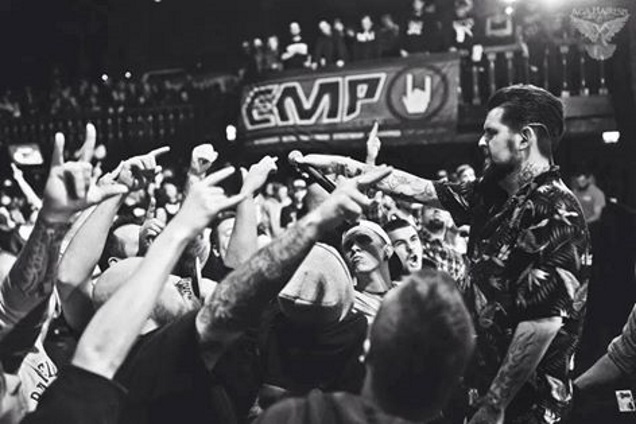 Ramallah, well, in my experience over here in the UK, people tend not to be quite so familiar with these guys. These guys existed alongside Blood for Blood, releasing their first full length, But A Whimper in 2002, which was followed by 2005’s Kill a Celebrity. Both these records I guess showcased a harder, more brutal and metalicised side to Rob’s nihilistic, tooth-blackening forays into his own life experience and psyche; explored through a blend of the heavy use of metaphor and stark truth. They are decent records. Hard as fuck, mate. But my heart truly rested with the aforementioned Blood for Blood records. Anyway it’s like 14 years since either band put anything out, in no small part due to Rob’s personal struggles with addiction.

Over the last couple of years, Rob has been putting out a sporadic video podcast, charmingly entitled White Trash Rob’s Nodcast. It’s often bleak and plumbs the depths of the squalor of addiction and the hard path to recovery, as well as being peppered quite heavily with old tour anecdotes and Boston scene stories from days of yore. I’m not gonna shit you, this thing helped keep my head in the game while I was living in London, and it was a sad week for me if there was no new episode… Admittedly, I’ve fallen off the Nodcast wagon to an extent over the last year, but, it’s been particularly sporadic, so I’m almost caught up. Anyways, go check it out. Start from the first episode. It’s great. Rob’s a fascinating and insightful guy.

Fuck me, I’ve been blathering on for 500 words and I’ve not said shit about the new release.

The LP opens with the title track, The Last Gasp of Street Rock n’ Roll, which serves as a fitting extended intro, with a galloping, fist pumping rock n’ roll feel. Perhaps the main reason this feels like a perfect intro is Rob’s self-referencing lyrics, working in epithets and rejoinders from his earlier career, and reframing them with typical WTR panache and asking the question on everyone’s lips: “whatever happened to the hardcore music we all know and love?”. Remember when the Beastie Boys used to sample their own shit, and everyone’s all like “genius, yo”? Yeah, guy. And that steady tempo build into that fast break section is impecably timed, before cycling back down to lead into I Don’t Believe which seems to stylistically pick up where Outlaw Anthems left off, calling out society and the vacuous emptiness of the dream world so many people seem to inhabit, seemingly inured to harsh truths.

Dead Girls and Boys Anthem kicks up another notch, sticking to the same Outlaw Anthems vibe, and running with it; in my mind this is absolutely the direction Blood for Blood would have taken following Serenity (2004, I Scream Records). This ‘un takes stock of fallen comrades and drug buddies and wrecked relationships and heavily salts the same with a (un)healthy dose of self-recrimination. This leads direct to a cover of City Boy, which originally appeared on Serenity. It’s a worthy version, and I get the impression that this is how Rob originally envisioned it. 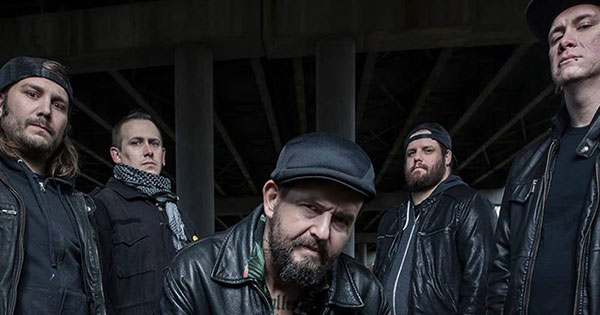 I Seen You Crawling strikes me as another harrowing vision of the life of an addict on the streets. Again this one is interspersed with classic Blood for Blood lines. I can’t help but feel these self-referencing moments carry a whole other type of weight of meaning. Rather than dripping with nihilistic venom, they seem to be soaked with regret. This feeds into the second cover on the EP, a much harder version of The Times We Had which originally appeared on the Sinners & Saints album, The Sky is Falling, which was released by Bridge Nine in 2001. That band also features my main man (and Rob’s brother) Mark Lind of the Ducky Boys and Warning Shots and many others. Anyway, go check that album out. It’s one of my all time favourites and gets played ALL THE FUCKING TIME. I still maintain it’s the album Guns n’ Roses weren’t good enough to write, and Mike Ness was too self obsessed to envision…

Bye Bye is the penultimate cut and is a somewhat unexpected classic rock feeling ballad, with intricately picked and strummed guitar. It’s steeped in darkness, and seems to me to be somekind of achingly beautiful OD ballad; reflecting on the bleakness of life and the sweet relief and release granted by death. The EP closes out with The Last Gasp of a wasted Youth and a Wasted Life. It’s hard as fucking nails, and there’s something uplifting and cathartic about it. It’s a typical Blood for Blood style “fuck you” song, yet seemingly delivered with a ray of hope, or at least a “going down swinging” mentality. Again with the self-referencing, here… I feel like this is hammering of the final nails into the Blood for Blood coffin. And I will also tell you this: it’s the song from the record that will have people scrambling over each other to grab the fucking mic. What a number to end on! Hells yeah!

This my friends, brothers and sisters, one and all, is without a doubt the LP of the year for me for 2019. I can’t see anyone topping this. It’s a Tony of Nurgle rating of 10/10 for this motherfucker.

Go play it now on the player below and tell me I’m wrong:

You can get this from State Line Records in the US and Randale Records or Coretex in Europe on a range of vinyl options or CD.

And a last note: Rob, when are we doing that interview that we occasionally talk about?