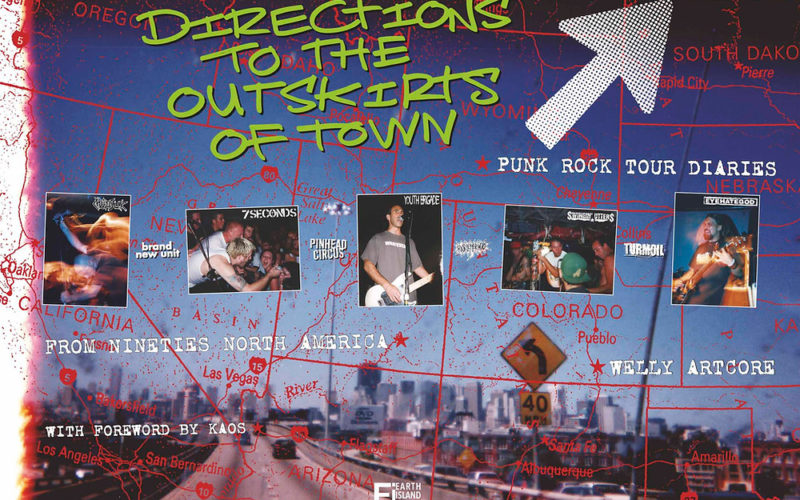 ‘Directions to the Outskirts of Town’ (taglined as punk rock tour diaries from nineties North America) is a new book by one Welly Artcore. The chances are that you may have come across Welly at some point; if not in person or through his creative output (the long-running Artcore Fanzine or his old band Four Letter Word), then perhaps by reputation. Prior to relocating to the good old US of A, yer man there was a mainstay of the UK punk scene for a long old time.

Football bellends often spew out spurious bits of nonsense with no true meaning; “it’s a game of two halves” being one example of such guff, which I suppose is meant to convey some level of superior knowledge, yet in reality is an oft toted way for stupid people to simulataneously bore the shit out of people whilst saying literally nothing, both achieved with a 0% fail rate. This is a book of two halves. I mean that in a literal sense. It’s comprised of two tour diaries giving different perspectives on touring; the author having fulfilled two very different roles in the respective halves. Quite what this has to do with football I have no fucking clue, but I can’t be arsed to go back and re-edit this.

Welly, to the benefit of the reader is one of those people (that prior to reading this) that I was half-convinced didn’t exist. You know, the ones that just record everything for posterity. I sometimes wish I’d done this, but given that I’ve not done anything interesting literally ever, I’m sure that if I had, it would make for painful reading and no fucker would (quite rightly) publish it. Anyway, Welly wrote it all down…

The first part of the book is about accompanying a band his mates were in on a tour of America as some kind of glorified merch guy meets bus driver. The band in question here being the infamous Chaos UK, something of a “punks’ punk” street punk band in the traditional sense, from the mean streets of Portishead. They formed in 79 and are still doing the rounds even now… Anyway, in 1994, Welly got in the van (in the true Henry Rollins sense of the phrase) and went round with them for 2 months. 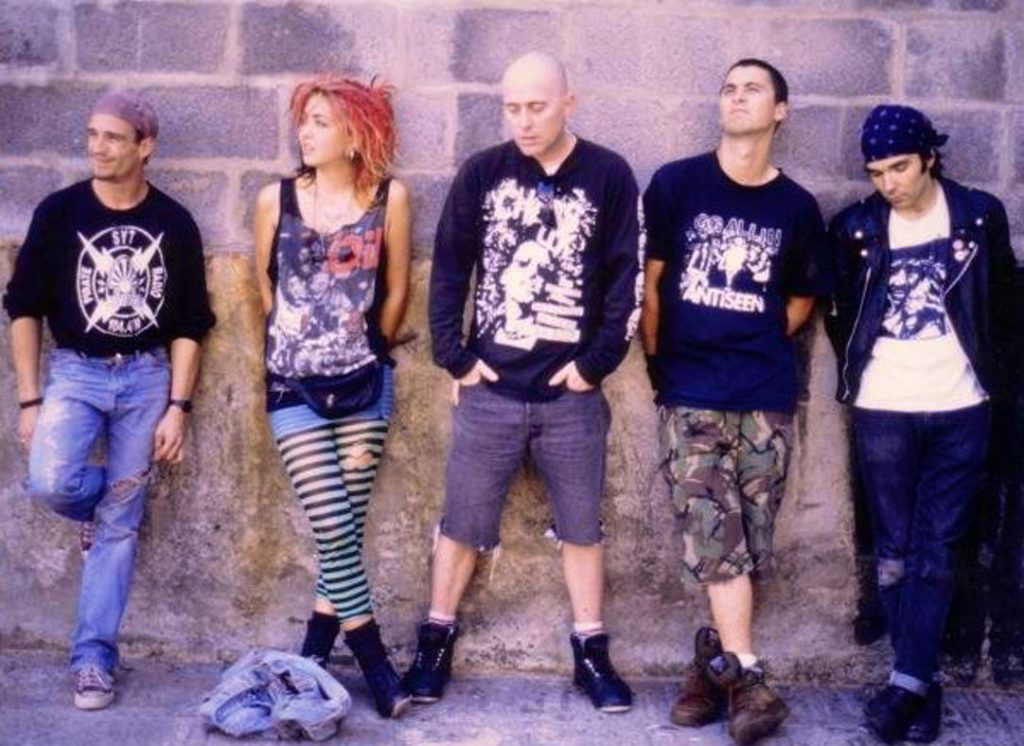 No big deal right? Oh yeah. 1994. Pre-internet, and pre-satellite navigation, innit. Payphones. Directions hastily scribbled on bits of paper. Getting hopelessly lost. Booze. Missing some gigs. Booze. Having nowhere to stay. Booze. Meeting proper lunatics. Probably more booze. It’s proper living life by the seat of your pants kind of stuff. Somehow blundering by on a wing and a prayer, and typically having well attended gigs that the audience more often than not is properly interested in.

Contrastingly, the second half of the book is from the perspective of a band member on tour; in this case as the singer of Four Letter Word. The band, as well as being one of Cardiff’s better exports ended up signed to BYO (the now defunct Better Youth Organisation – run by the Stern brothers from Californian punk stalwarts Youth Brigade). Seemingly Welly is still a bit confused as to how this even happened in the first place, but there we go. Life is weird innit. What follows is a tour beset by similar problems to the preceding Chaos UK tour, in no small part because the internet was still not really a household thing (at least in working class Britain), and nobody had a sat nav unless they were wadded. 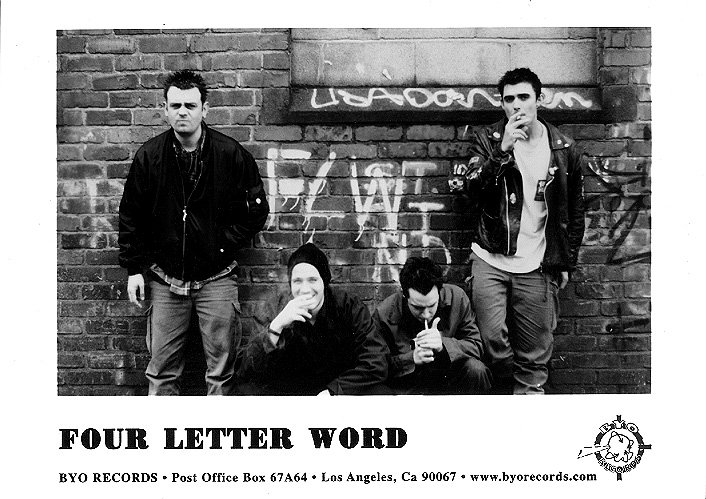 A big difference here is seemingly how much more ramshackle the state of affairs is, even given how the tour was organised by the Stern brothers (who sound like a bunch of whining little dweebs from the account given here!). Crap equipment. Dodgy promoters. Nazis. Disinterested crowds. Drunken irresponsibility. Lunatics. Terrible American beers. Mental breakdowns. Reunions with people from the first half of the book. Oh, and a bit of record shopping.

Despite the fact that I’ve doubtless made this sound as dull as fuck, it’s actually a damn fine read. The principle reasons for this being Welly’s delivery. By turns self-deprecating, sardonic and blunt. To coin another well-used epithet, the devil is in the details: who played what show, where the venues were, names of promoters, interactions with bands encountered, a rare old catalogue of flyers and photos from along the way.

I’m sure a load of new-jack nippers from the bands of today will doubtless complain that touring is still dead hard or whatever, but from reading these accounts, it was certainly much more fraught with danger and uncertainty. Kids today, mate. They don’t know they’re bloody born. Or something.

You can pick this up from Earth Island Books. While you are there, you may as well pick up some other great books by Tim Cundle and Ian Glasper too. You can thank me later innit.